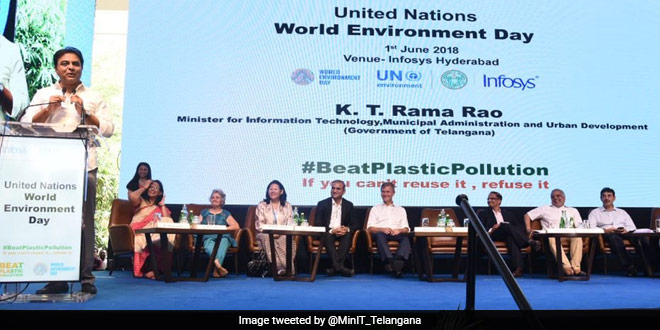 The state government of Telangana under the leadership of Chief Minister Shri Kalvakuntla Chandrashekar Rao has initiated one of the most ambitious and aggressive programmes with respect to the environment in our state, we call it Haritha Haram (A Green Necklace for mother earth). As a part of this programme, we have decided, to plant 2.3 billion saplings in the course of 5 years and take our green cover from 23% currently to 33%. This is going to be the third largest effort, not in India, not in the world, but in human history.

As a part of this program in last three years, we have already planted 71 crore saplings and more than 39 crore saplings will be planted in the next four months, right after the onset of monsoon: Minister @KTRTRS #WorldEnvironmentDay #BeatPlasticPollution

The minister said that in the last three years the state has already planted 71 crore saplings and in the next four months, more than 39 crore saplings would be planted.

Speaking about another green initiative in the state, the solar rooftop programme, the minister said that as of today in the state more than 24 megawatts of energy is generated through this programme and another 20 megawatts is underway.

This again will be the huge initiative, lot of campuses, organisations in the coming few years will go off-grid, just like the Infosys campus here in the Hyderabad, added Minister K T Rama Rao.

From Telangana to Hyderabad

Talking about how Hyderabad will soon become one of the most progressive cities of India, the minister highlighted how the municipal corporation has today become the leaders of green activities in the country.

In a run-up to 45th World Environment Day, the municipal corporation will also launch a black bag initiative. Giving details about the initiative, that the minister said,

We are colour coding our waste collection bags – green for bio-waste, red for metallic waste and black for plastic waste. The goal is to reduce the consumption of plastic within the city, which is today necessary for our country and the world.

Minister K T Rama Rao also spoke about the plan of converting 3800 RTC buses that are plying in the city of Hyderabad into electric buses. He said,

The buses that are currently running are either based on diesel or bio-fuel. We will slowly going to phase them out, and will bring 500 electric vehicles in the next 6 months. Today, after this event we will also be flagging off 100 electric vehicles just to focus on sanitation in our city. The goal is to completely replace the sanitation vehicles as well.

Last but not the least, the minister also announced the state’s plan to rejuvenate all its 46,000 lakes and tanks through the ‘Mission Kakithiya’ which was started in the year 2015.

There are problems, I know, this initiative will take time, but I am sure, we will be able to restore these lakes and tanks completely, signs off K T Rama Rao.

World Environment Day Special: Surrender A Plastic Bottle, Get A Sapling In Return – A Mumbaikar’s Initiative To Combat Plastic Addiction