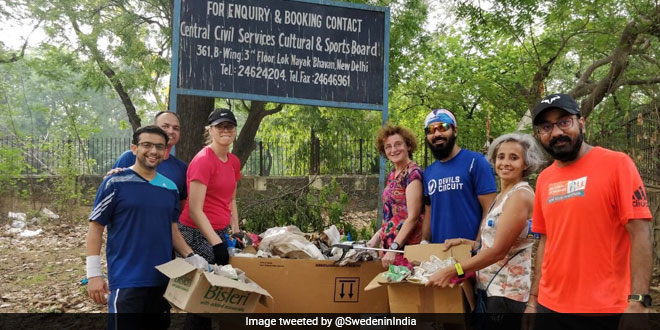 The European Union delegates of Belgium and Sweden have organised for a plogging event on June 1 at Children’s Park, near Delhi’s India Gate. Plogging is a contemporary and an exercise gradually gaining popularity, which involves jogging while collecting waste. The Swedish fitness exercise has gained immense popularity across the world and has recently found participants in India. Given the rising curiousity and increasing involvement in varying events for World Environment Day 2018, the EU delegates are expecting enthusiastic participation from people in the plogging event, which encourages people to both stay fit and keep the environment clean.

Are you ready for tomorrow’s #WorldEnvironmentDayPlogg? Put on your running shoes and bring water in your reusable water bottle and meet us at 7 AM at the amphitheatre in Children’s Park by India Gate. Chalo plogging karein! #WorldEnvironmentDay2018 #BeatPlasticPollution pic.twitter.com/0MuLPNKECe

The European Union delegation, along with the Ministry of Environment will co-host a conference on June 1, and share best practices to beat plastic pollution. Experts from European nations of Spain, Hungary, Poland, France, Belgium, Greece, Sweden and several others are expected to join the conference and share best practices on how to curb the menace of plastic pollution.

India’s efforts to reduce plastic pollution have resulted in the country being chosen as global host for World Environment Day 2018. A curtain raiser for the event was held on May 25, where Union Environment Minister Dr Harsh Vardhan appealed for a plastic free India.