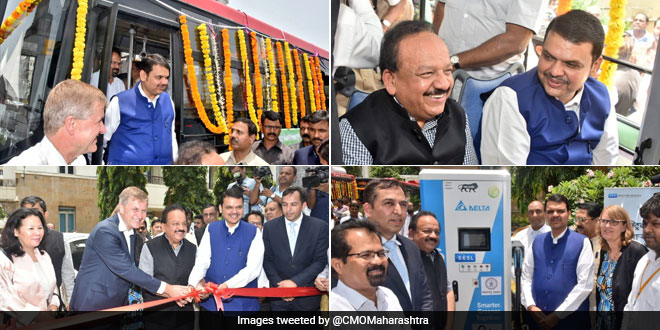 CM @Dev_Fadnavis , Union Minister @drharshvardhan , Mr @ErikSolheim , Executive Director, @UNEnvironment , officials from UN and other dignitaries take a round in BEST electric buses from Mantralaya to Gateway of India. pic.twitter.com/wcSic562NS

At the Gateway, Mr Fadnavis flagged off the first set of 10 EVs in Mumbai and said, “Today, Maharashtra embarks on the path of e-mobility marking an important milestone in its trajectory of growth. He further termed this day as a Historic day for Maharashtra and expressed confidence that this program will lead road towards sustainability in environmental protection as the launch of the electric vehicles will reduce emissions from traffic across the state.

We want to become the biggest consumer of the electric mobility. Pune, Mumbai to take lead. I feel that use of this electric mobility by Government is very important. It is just the beginning and long way to go. Maharashtra will lead this change, said Mr Fadnavis.

Sharing details of the MoUs signed by the Maharashtra government on Thursday with netizens, the Chief Minister said,

The Memorandum of Understandings signed on Thursday includes the supply of Electric Vehicles and chargers to Government of Maharashtra under the electric policy.

Erik Solheim, UN Environment Head said, “E-mobility is the future of our cities. Maharashtra’s leadership in promoting electric vehicles is a big step towards cities that can breathe, and where innovation thrives!”

Also present at the launch ceremony was Actor and UN Environment Goodwill Ambassador Dia Mirza and Environmentalist Afroz Shah. Sharing glimpses of the event with the netizens, Dia said,

A moment of pride for #India! The future for urban transport is here. What a fantastic flag off of e-vehicles.