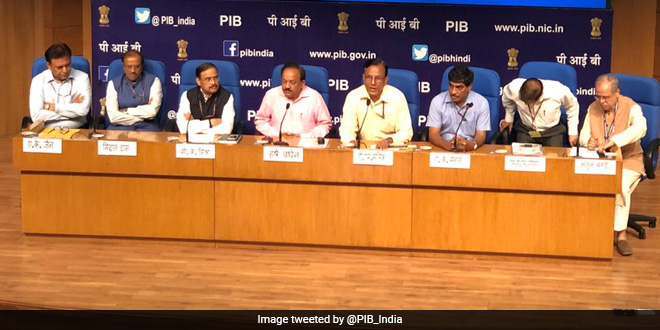 New Delhi: Officially kick-starting the 45th World Environment Day celebrations, the global host country, India today declared that plastic pollution should be eradicated from the country completely just like Polio. Union Environment Minister Dr Harsh Vardhan highlighted how plastic pollution has started taking a toll on our planet, and said, “India produces 25,940 tonnes of plastic waste every day. Out of which 40% remains uncollected. Today, this uncollected plastic pollution has started taking the life of our marine life, cows. We need to help and curb it effectively.”

Sharing details for the Environment Day celebrations in the country and steps taken to help curb growing plastic pollution, the minister said,

We are very excited to get the honour of being the host country for this years’ world environment day celebrations. We have been working hard from past so many months, have taken huge steps to curb plastic pollution, all the ministries have been asked to go plastic free, we have requested schools across the country to go plastic free and has asked students not to carry any form of single-use plastic water bottles, cups, folders, plates, water jugs, trays or pen stands. Moreover, in the run-up to world environment day celebrations, in 19 states of India, we have undertaken the task of clean-up of 24 beaches and 24 river stretches.

Highlighting the main events details in New Delhi’s Vigyan Bhawan, Dr Harsh Vardhan said that three important things will be discussed from June 1 to June 5 – Air pollution campaign status and impact (June 1); Marine litter and strategies (June 2); New plastic economy and sustainable living (June 3); on June 4 green federation meeting will be held along with all the environment ministers of the states. He adds,

Speaking about Green Good Deeds, the societal movement launched by the environment ministry ahead of world environment day, Dr Harsh Vardhan said that now the initiative has found acceptance by the global community. He added,

I was in the 4th BRICS Environment Ministerial in Durban, South Africa, where I had urged the BRICS nations to jointly help in the development of a social movement to fight for the protection and conservation of the environment. The next BRICS Ministerial on Environment has agreed to include “Green Good Deeds” in its official agenda in the next Ministerial in Brazil and another meeting in Russia.

Talking about the motive behind launching this initiative, the minister said,

As Dr Harsh Vardhan appealed towards the end of his speech, he said,

I urge people to make this world environment day a successful event – come out join the clean-up activities happening around the world, do one green good regularly and ditch one single use plastic like a bottle, poly bags, to name a few completely from your life.