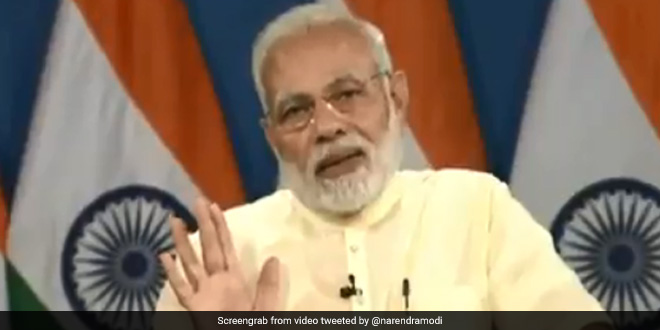 New Delhi: Prime Minister Narendra Modi on World Environment Day (June 5), while addressing the plenary session attended by state environment ministers, representatives from the United Nations, and members from various industry bodies, acknowledged that water crisis is a major challenge across India and assured that the Namami Gange initiative to clean the river will soon show results. PM Modi also stated that India is preparing to join the global ‘Clean Seas campaign’ to contribute towards clean oceans.

We recognise the need to tackle the issue of water availability, which is becoming a major challenge in India. We have launched the Namami Gange initiative. This programme has already started giving results and will soon revive the Ganga, our most precious river, the Prime Minister said, adding that environmental degradation hurts the poor and vulnerable the most.

The quest for material prosperity cant lead to environmental degradation. We must remember that an unclean environment hurts the poor and vulnerable the most. pic.twitter.com/yBX7q6IfQn

It is the duty of each one of us, to ensure that the quest for material prosperity does not compromise our environment, he added.

Pointing out that India is primarily an agrarian country, PM Modi said that continuous availability of water for agriculture sector is important and that the Prime Minister Irrigation Scheme was launched to ensure that no farm goes without water.

Our motto is more crop, per drop, he added.

On the occasion of 45th World Environment Day, for which the theme is ‘Beat Plastic Pollution’, Prime Minister Narendra Modi also urged the nation to come forward and protect the environment by shunning the use of single-use plastics.

Our choices today will define our collective future. Let us build strong partnerships, make the right choices and make our future cleaner as well as greener, the Prime Minister said on Twitter.

Our choices today will define our collective future. Let us build strong partnerships, make the right choices and make our future cleaner as well as greener. https://t.co/hTbhdK7ohy pic.twitter.com/V0ymKaXgg0

The Prime Minister also expressed concern over declining number of fishes and ocean pollution due to plastic waste. “Marine litter, especially micro-plastic, is a major trans-boundary problem and is now entering our food chain. India is preparing to join the clean seas campaign. However, per capita plastic consumption in India is lower than that in many parts of the developed world,” PM Modi said.

India produces about 25,000 tonnes of plastic waste every day, of which only 60 per cent is processed, according to the data provided by the Ministry of Environment.

Plastic now threatens to become a menace to humanity. A lot of it doesn’t make it to recycling plants. Worse, a lot of it is also non-biodegradable and it has a deadly impact on our marine ecosystem. Declining fish, warming oceans and vanishing habitats are results of plastic waste, he said adding that ‘Clean India Mission’ has a special focus on “plastic waste management”.

PM Modi concluded his speech during the plenary session by stating, “Let us all join together to beat plastic pollution and make this planet a better place to live. The choices that we make today, will define our collective future. The choices may not be easy. But through awareness, technology, and a genuine global partnership, I am sure we can make the right choices.”