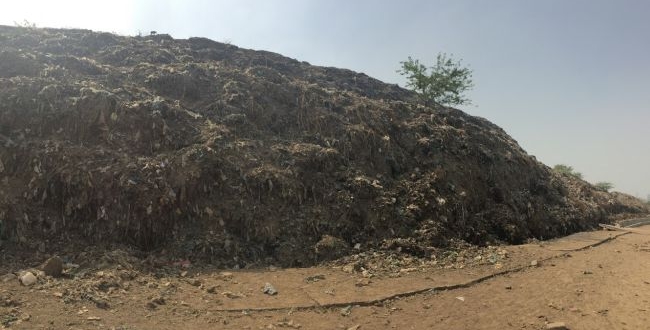 New Delhi: Even as the country’s waste management rules call for effective recycling and have fixed a cap of 20 metres on landfill sites, Delhi’s huge un-engineered dumping grounds have grown taller by two to 15 metres in the past 12 months, officials in the know have told IANS. India revised its decade-old solid waste management rules in 2016 but several norms seem to have collapsed at Delhi’s three un-engineered and over-saturated landfills — Ghazipur in the east, Okhla in the south and Bhalaswa in the north. Only the one at Bawana in the northwest is a “engineered solid waste dumping and processing site”.

A source of air-pollution and accidents, nearly one percent of the Ghazipur landfill collapsed in September 2017, claiming two lives. Over past year, Ghazipur has grown taller by 15 metres, from 50 metres in 2017 to about 65 metres at present, officials told IANS. Besides, the landfill at Bhalaswa has grown by about two metres and that at Okhla has gained five metres in height and acquired 14 acres of additional area.

“It’s gaining height rather than losing as planned. At present Ghazipur landfill site must be around 60 ot 65 metres. About 50 per cent is bio-degradable while about five to seven per cent is plastic,” Pradeep Khandelwal, Chief Engineer, East Delhi Municipal Corporation (EDMC), told IANS.

“We have been successful in avoiding untoward incidents; there have only been two fire incidents since October 2017,” Khandelwal said, adding that EDMC, in collaboration with IIT-Delhi, is working on giving a proper shape and slope to the landfill so that it does not collapse.

The Ghazipur landfill, spread over 70 acres of land, holds about 150 lakh tonnes of waste. It was supposed to be shut in 2008 as it had been polluting the air, water and soil since 1984. Officials at EDMC reiterated a two-year-old story that solid-waste from Ghazipur will be used by the National Highway Authority of India (NHAI) for constructing a 74 km stretch of the 137-km-long Delhi-Meerut Expressway. There’s been no forward movement on this.

According to the 2016 solid-waste management rules, a landfill site must not exceed 20 metres in height, must not be older than 22-25 years and must have a clay-lining at the bottom to save the land and ground water.

The Bhalaswa landfill is spread over 40 acres and has gained about two metres in height since 2017, officials said.

“Our plan is to cap the height here… a tender for waste to energy is awaited, so that it does not grow any further,” Jain added.

The Okhla landfill site under South Delhi Municipal Corporation (SDMC) has stopped growing after adding five metres in the past year. Waste is now dumped at another recently-acquired 14-acre plot. “We have stopped further dumping as the landfill grew to 55 metres spread over 32 acres. Additional 14 acres of area is partially operational for now,” Tufel Ahmed, an SDMC official, told IANS.

He added that the plan is to reduce the height of Okhla landfill to 30-35 metres, for which the process of cutting and sloping is underway. According to Ahmed, a new waste-to-energy plant at Okhla, for which the tendering process is being worked out, will help divert 2,000 to 2,200 tonnes of garbage being dumped there every day.  In 2016, while India produced 62 million tonnes of solid waste annually, of which only 12 million tonnes were treated, Delhi produced over 14,000 tonnes daily.

There are no clear figures for 2018 but experts estimate that the current annual solid waste generation must be no less than 65 to 72 million tonnes. This figure is expected to rise to 436 million tonnes by 2050.  Delhi is also top producer of plastic waste — 689.52 tonnes daily, while India produces over 25,000 tonnes every day, of which only 60 per cent is collected and processed, according to Union Environment Minister Harsh Vardhan.

According to business analysts, the Indian waste management industry has a potential of $15 billion with promising growth prospects. Inability to tap this potential, according to experts, is a “major inaction”.

Swati Singh, waste management expert at the Centre for Science and Environment, told IANS: “In January 2018, solid waste management bylaws were formed in Delhi, under the 2016 revision of old waste rules, yet there has been no progress in Delhi’s landfill sites, they should have ideally been completely shut.”