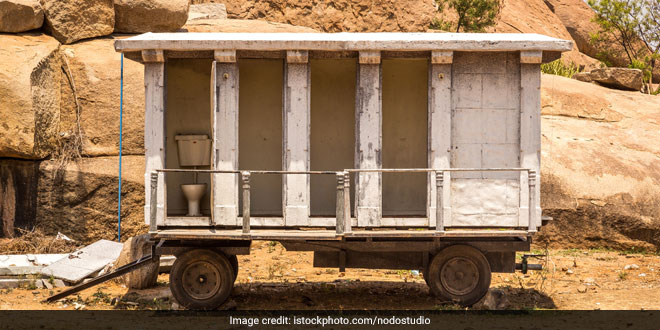 New Delhi: From being tagged as a country with ‘highest number of people living without the basic human right – a toilet’ few years ago, to now being called as a country that has put ‘light on the most important topic – sanitation, which is not a subject of discussion anywhere’ by one of the world’s most successful and influential businessmen and philanthropists, Bill Gates, India over the years has achieved a lot.

In the year 2014, India’s sanitation coverage in the rural areas was mere 38 per cent, and today, the sanitation coverage has moved to 96 per cent. Not just that, nearly 9 crore toilets have been constructed in the country, more than 5 lakh villages, 530 districts, 25 states and Union Territories have achieved the  open defecation free (ODF) status.

India hopes to be a clean and an open defecation free nation by Mahatma Gandhi’s 150th birth anniversary next year (October 2). With this goal in mind, India is celebrating each day and is providing access to safe sanitation to thousands of people across the country. This year on November 19, which is also celebrated as ‘World Toilet Day’, India plans to take the lead.

Here’s everything you need to know about World Toilet Day 2018:

Why Is World Toilet Day Celebrated

World Toilet Day is celebrated globally to tackle the open defecation crisis in the world. The idea to associate a particular day with toilets was thought OF by a Singaporean businessman Jack Sim in 2001, as poor sanitation was killing people and costing millions. Jack founded World Toilet Organisation and declared November 19 as World Toilet Day. In 2012, the day became popular as the first slogan “I give a sh–, do you?” associated with World Toilet Day came out, in a bid to make people aware about this crucial topic. One year later, in 2013, the United Nations adopted the day and passed a resolution recognising November 19 as World Toilet Day as an official UN international day. Two years later, UN set a target to ensure everyone has access to a household toilet in the world by 2030.

Each year, World Toilet Day is celebrated with a unique theme. This year, the theme for the day is “When nature calls, we have to listen and act.”

The aim of the theme is to educate people on how are we turning the environment into an open sewer and the need on building toilets and sanitation systems that work in harmony with ecosystems. The theme will also highlight some nature-based sanitation solutions such as composting toilets that help in treating human waste on site, producing a free supply of fertiliser that later helps in the growth of crops.

How India Is Celebrating The Day

The Ministry of Drinking Water and Sanitation (MoDW&S) has instituted November 19 as “Swachh Bharat World Toilet Day ” and has started a special ‘World Toilet Day Contest’, wherein all districts and states in India have been asked to conduct various  sanitation related activities from November 9 to November 19 and engage the community to bring a mass behavioural change in their community.

From November 20 to November 30, the District Collectors and State Mission Directors can apply for the contest stating the activities undertaken by them from November 9 to 19 and the outcome of the ground events done.

The aim of the contest is to motivate individuals to do their best in achieving country’s open defecation free targets, re-enforcing the importance of sanitation in one’s life and ODF sustainability of the areas that have successfully achieved the ODF tag.

In Uttar Pradesh’s Shamli district, a special cleanliness drive has been organised in Shamli district where people have come forward to clean-up the public areas on their own and are spreading the message of safe sanitation and the importance of keeping areas clean so that together they can contribute to a cleaner India.

As a part of the #WorldToiletDay campaign, a cleanliness drive was organised in Shamli district of #UttarPradesh where communities came together to spread the message of safe #sanitation and work towards a cleaner future for the nation. pic.twitter.com/rsxl48H6z6

In Mayurbhanj district of Odisha, A rally and human chain was organised across 26 blocks to make people aware about Swachh Bharat Mission and what steps can be taken by each one of them to help fulfill a dream of a Swachh nation by October 2, 2019.

A rally and human chain were organised to echo the message of #Swachhata for #WorldToiletDay across 26 blocks of Mayurbhanj district, #Odisha. #WTD2018 pic.twitter.com/jF0m1MxSJz

In Daringbadi block of Odisha, a special one-day event was held to talk about safe sanitation practices and educate people on various aspects related to sanitation. During the event, more than 6,000 people were trained on how to construct a toilet at home on their own, along with ways of keeping household toilet cleans.

In Lumdung village of East Kameng in Arunachal Pradesh, a village headman went door to door to talk about the importance of building and using toilets at their home.