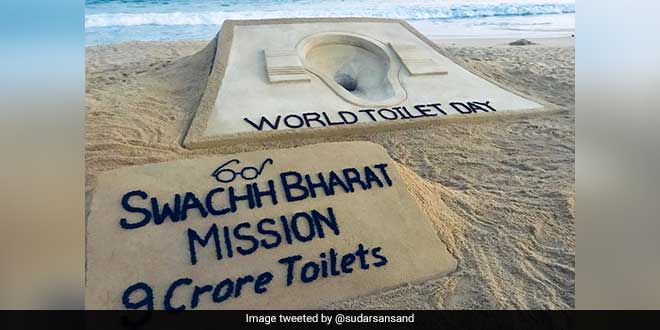 Mumbai: After spreading the message of waste management, open defecation, cleanliness and hygiene in the most creative ways through his sand art installations, Padma Awardee Sudarsan Pattnaik has yet again used World Toilet Day as an opportunity to spread the message of Swachh Bharat Abhiyan. Only this time, he has proudly boasted about the campaign’s achievement in terms of toilet construction. Nine crores, that is the magic number Odisha-based artist created alongside a toilet on the Puri beach, to highlight the number of toilets built under the cleanliness mission since its launch in 2014.

Also Read: The Empowering Of Communities In Some Of Delhi’s Slums Is Resulting In A Silent Sanitation Revolution

Prime Minister Narendra Modi, who launched the campaign in 2014 with a target to make the country Open Defecation Free (ODF) on Mahatma Gandhi’s 150th birth anniversary (October 2019), shared Mr Pattnaik’s art installation. Referring to his sand work as part of people’s movement for a cleaner India, the Prime Minister said,

The movement for a cleaner India and ensuring better sanitation facilities is a people’s movement. It is the 130 crore Indians, particularly women and youngsters who have taken the lead in this movement. I congratulate all those working to fulfil the dream of a Swachh Bharat.

The movement for a cleaner India and ensuring better sanitation facilities is a people’s movement.

It is the 130 crore Indians, particularly women and youngsters who have taken the lead in this movement.

I congratulate all those working to fulfil the dream of a Swachh Bharat. https://t.co/2a6wzwzV44

“Brilliant sand art piece by @sudarsansand on the eve of WorldToiletDay. A fitting tribute to all the swachhagrahis in India who are making @swachhbharat a reality,” said Mr Iyer.

Brilliant sand art piece by @sudarsansand on the eve of WorldToiletDay. A fitting tribute to all the swachhagrahis in India who are making @swachhbharat a reality. @umasribharti @PMOIndia https://t.co/7Ui5fBZ2Qs

Situated on the shore of Bay of Bengal, Odisha’s Puri beach has witnessed innumerable creative sand arts revolving around the theme of cleanliness, sanitation, emvironment and garbage crisis in the past. Mr Pattnaik uses every opportunity to tell people about living a sustainable lifestyle.

For instance, during the Ganesh Chaturthi this year, he had created a 20-feet long green and yellow sand sculpture of Lord Ganesha which was accompanied with the message – ‘Go green, beat plastic pollution’.

On other occasions such as Earth Day, World Ocean’s Day and Turtle Day, Mr Pattnaik created mesmerising sand arts portraying the plight of marine animals that die every year due to plastic pollution and urged citizens to help beat the plastic pollution by reducing the consumption of plastic items. While on Earth Day (April 22), he had created one-of-its-kind 3D sand art on showcasing a crocodile with a plastic bottle in its mouth, on Independence Day he had made a sand art with message ‘Say No To Plastic Flags’.

Also Read: World Toilet Day 2018: How India Is Gearing Up For The ‘D-Day’ To Achieve The Dream Of Swachh Bharat

All You Need To Know About World Toilet Day

In a bid to help break taboos around toilets and make sanitation for all a global development priority, the United Nations General Assembly has designated November 19 as World Toilet Day. The resolution declaring the Day titled ‘Sanitation for All’ was adopted on 24 July, 2013, to urge UN Member States and relevant stakeholders to encourage behavioural change and the implementation of policies to increase access to sanitation among the poor, along with a call to end the practice of open defecation, which it deemed extremely harmful to public health.

80% of all the world's wastewater flows into the environment without being treated or reused. This has detrimental effects on the planet. Luckily, nature based solutions such as this ⬇ can improve human and environmental health & sanitation. #WorldToiletDay #WhenNatureCalls pic.twitter.com/F1AwD3e5YX

The resolution also recognises the role that civil society and non-governmental organisations in raising awareness about this issue. It also calls on countries to approach sanitation in a holistic manner to include hygiene promotion, the provision of basic sanitation services, and sewerage and wastewater treatment and reuse in the context of integrated water management.

This year’s theme is to not only build toilets but also ensure a system where human waste gets treated to prevent contamination of natural water resources. The theme is based on the following narrative:

When nature calls, we need a toilet. But, billions of people don’t have one. This means human faeces, on a massive scale, are not being captured or treated – contaminating the water and soil that sustain human life. We are turning our environment into an open sewer. We must build toilets and sanitation systems that work in harmony with ecosystems.

World Toilet Day 2018: How India Is Gearing Up For The ‘D-Day’ To Achieve The Dream Of Swachh Bharat