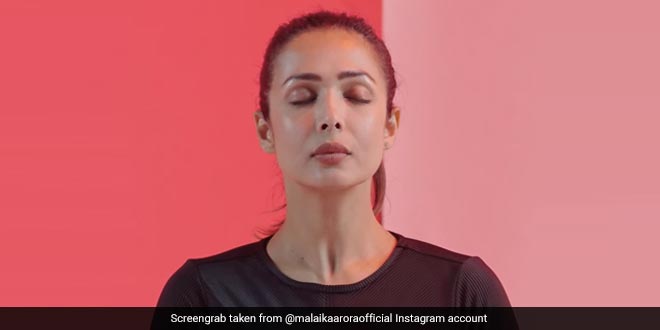 New Delhi: Actor Malaika Arora is known for a stringent fitness regime and she regularly shares tips updates from her fitness routine with fans on social media. Recently, the star, who strongly advocates the power of yoga, shared several yoga asanas on her social media to motivate her fans to roll out their yoga mat and take control of their mental health. The video shared by Malaika Arora focuses on three asanas for better mental health – Adho Mukha Svanasana or Downward Dog Pose, Balasana or Child’s Pose, and Sukhasana. In the short video, the actor is seen performing all the three asanas. While posting the video she said, “Let’s move for the mind. Mental health needs equal attention as physical health. I recommend, these three asanas that can be practised regularly to look after our mental health.”

A look at the three asanas demonstrated by Malaika Arora:

Adho Mukha Svanasana or Downward Dog Pose: This one asana is yoga’s most widely recognized poses, it helps strengthen the core and improves blood circulation in the body, while providing a full-body stretch. It is also known for relieving stress and anxiety.

How To Perform This Asana: Start on all fours – wrists inline with shoulders and toes tucked. On the exhale, push your hips up and back, straightening your legs

Balasana or Child’s Pose: This asana is known for releasing tension in the chest, boosts better sleep patterns, relaxes the back and spine, and alleviates the stress felt in the shoulders and hands.

How To Perform This Asana: Place your knees hip-width apart and inhale. Now bend forward and exhale as you lay your torso between your thighs and swing your hands forward

Sukhasana: Sukhasana is a simple cross-legged sitting asana in yoga, sometimes used for meditation. It is known for having a relaxing effect on the mind and body, thus reducing stress and anxiety. Experts also say that this asana helps improve focus and makes one attentive, strengthens the back muscles, improves the overall body posture and lengthens the spine and back muscles.

Watch:Five Yoga Asanas That Can Help In Post COVID Recovery

“Our Presence Needs To Be Recognised”, Says Onir, Filmmaker And Author On The Inclusion Of LGBTQ+ Community