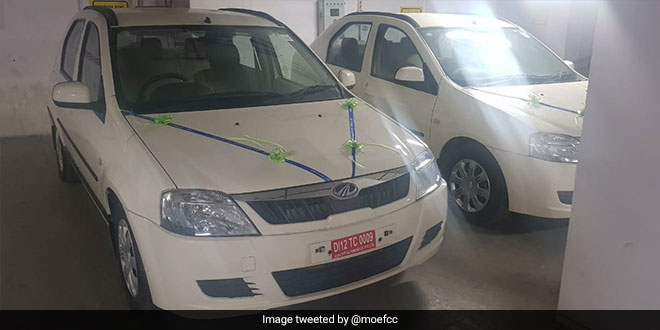 New Delhi: Giving a push to the central government’s ambitious target of having 30 per cent of total vehicles on road as electric vehicles by 2030, the Ministry of Environment, Forest and Climate Change (MoEF&CC) on Monday (July 1) procured five electric cars for official use. The electric cars have been acquired from EESL (Energy Efficiency Services Limited), a joint venture of PSUs (Public Sector Undertakings) of the power ministry, with a motive to combat the problem of air pollution in the national capital Delhi.

The MoEF&CC and EESL entered into an agreement for five electric cars for official usage and EESL has supplied five seater sedan cars by Mahindra. Sharing the details of electric cars with NDTV, Ahtaysham Khan, Manager, Electric Mobility, EESL, said,

Mahindra Sedan provided by us gives a driving range of 130 km on a single charge at standard conditions. While a slow charger (AC charger) will take six to eight hours to fully charge the car, fast charger (DC charger) can charge the car in 1.5 hours (90 minutes).

Charging facilities for the same have been developed at the premises of MoEF&CC in their parking area. A total of three chargers – two alternate current (AC) chargers and a direct current (DC) charger have been installed at the Ministry’s premises. While AC chargers are capable of charging six electric cars at a time, a DC charger caters to only one car.

The ministry has undertaken the project on a pilot basis. According to PTI’s sources,

Shedding light on the ministry’s plan to multiply its fleet of electric cars, Mr Khan said,

Currently, MoEF&CC will be using these electric cars on a pilot basis. In future, if the ministry intends to have more cars than we will definitely help them expand their fleet of cars and chargers. For now, we are under an agreement for six years for complete fleet management.

With Its Intensive Anti-Plastic Drive, Mount Abu Gears Up To Become Plastic Free On This Independence Day