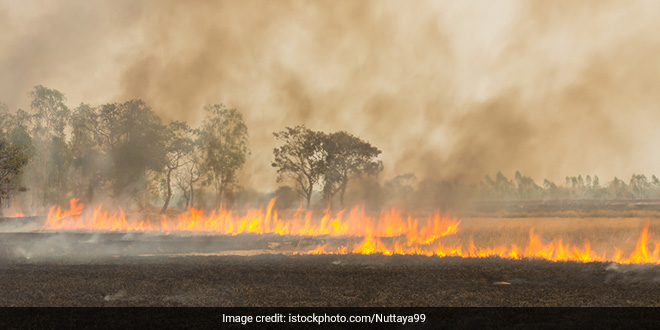 New Delhi: A total of 1,695 incidents of stubble burning have been reported this year so far from Delhi, its adjoining states and Punjab as against 3,431 farm fires in the corresponding period last year, the Commission for Air Quality Management (CAQM) said on Monday (October 17). Punjab has reported 1,444 incidents of farm fires as against 2,375 incidents in the corresponding period last year, the statutory body constituted in 2021 said in a statement. Haryana has logged 244 fire events as compared to 1,026 in 2021 and National Capital Region (NCR) districts of Uttar Pradesh have recorded only five such incidents as against 30 last year. Delhi has reported two incidents of stubble burning this year so far.

The first paddy residue burning incident was reported on September 15 in Punjab, September 18 in Haryana, September 30 in the NCR districts of Uttar Pradesh and October 5 in Delhi, the CAQM said. The CAQM has been regularly reviewing the situation along with chief secretaries of Punjab, Haryana, Uttar Pradesh, Rajasthan and Delhi, and secretaries of agriculture and environment departments of these states. According to the CAQM, around 31,700 custom hiring centres and cooperatives have been set up in Punjab, Haryana and NCR districts of Uttar Pradesh and more than two lakh crop residue management machinery are available for utilisation.

Along with unfavourable meteorological conditions, paddy straw burning in adjoining states is a major reason behind the alarming spike in air pollution levels in the national capital in October and November. Farmers set their fields on fire to quickly clear off the crop residue before cultivating wheat and vegetables.

According to the Indian Agricultural Research Institute, Punjab had reported 71,304 farm fires between September 15 and November 30 last year and 83,002 farm fires in the corresponding period in 2020.

Last year, the share of farm fires in Delhi’s PM 2.5 pollution had peaked to 48 per cent on November 7.