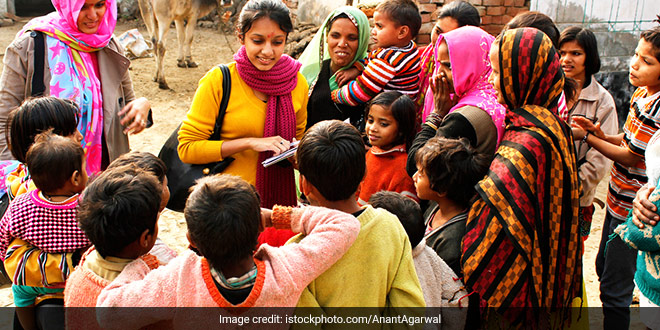 United Nations: The number of poor people in India fell by about 415 million between 2005-06 and 2019-21, a “historic change” and a demonstration that the Sustainable Development Goal target of reducing at least by half the proportion of men, women and children of all ages living in poverty by 2030 is possible to achieve, even at a large scale, according to the UN. The new Multidimensional Poverty Index (MPI) released on Monday (October 17) by the United Nations Development Programme (UNDP) and the Oxford Poverty and Human Development Initiative (OPHI) at the University of Oxford said that in India, 415 million people exited poverty between 2005/06 and 2019/21.

It demonstrates that the “Sustainable Development Goal target 1.2 of reducing at least by half the proportion of men, women and children of all ages living in poverty in all its dimensions according to national definitions by 2030 is possible to achieve — and at scale”, it said.

The UN in a press release on the report said,

In India, some 415 million people left multidimensional poverty in a 15-year period — a historic change. India is an important case study for the Sustainable Development Goals, the first of which is to end poverty in all its forms and to reduce at least by half the proportion of men, women and children of all ages living in poverty in all its dimensions according to national definitions by 2030, all while leaving no one behind, it said.

The report said based on 2020 population data for India, it has by far the largest number of poor people worldwide (228.9 million), followed by Nigeria (96.7 million projected in 2020).

Despite progress, India’s population remains vulnerable to the mounting effects of the COVID-19 pandemic and to rising food and energy prices. Integrated policies tackling the ongoing nutritional and energy crises should be a priority. Despite tremendous gains, the ongoing task of ending poverty for the 228.9 million poor people in 2019/2021 is daunting — especially as the number has nearly certainly risen since the data were collected. There were still 97 million poor children in India in 2019/21 — more than the total number of poor people, children and adults combined, in any other country covered by the global MPI. Yet, these multipronged policy approaches show that integrated interventions can improve the lives of millions of people, the report said.

The poorest states and groups in India (children, lower castes and those living in rural areas) reduced poverty the fastest in absolute terms, although the data do not reflect post-Covid-19 pandemic changes, the report said.

While poverty among children fell faster in absolute terms, India still has the highest number of poor children in the world (97 million, or 21.8 per cent of children ages 0–17 in India), it said. The report said across 111 countries, 1.2 billion people — 19.1 per cent — live in acute multidimensional poverty. Half of these people – 593 million – are children under age 18.

The analysis looks at the most common deprivation profiles across 111 developing countries. The most common profile, affecting 3.9 per cent of poor people, includes deprivations in exactly four indicators: nutrition, cooking fuel, sanitation and housing.

More than 45.5 million poor people are deprived in only these four indicators. Of those people, 34.4 million live in India, 2.1 million in Bangladesh and 1.9 million in Pakistan — making this a predominantly South Asian profile, it said.

In some countries, subnational regions that were initially among the poorest in their country reduced poverty faster in absolute terms than the national average, narrowing the poverty gap. These include Bihar, Jharkhand and Uttar Pradesh in India (2015/2016 – 2019/2021). The report said the reduction in Multidimensional Poverty Index (MPI) value in India was swift across the two most recent periods.

The country’s MPI value and incidence of poverty were both more than halved.

India’s progress shows that this goal is feasible, even at a large scale, it said.

The report noted that the effects of the COVID-19 pandemic on poverty in India cannot be fully assessed because 71 per cent of the data from the 2019/2021 Demographic and Health Survey for the country were collected before the pandemic. The 2019-2021 data show that about 16.4 per cent of India’s population live in poverty, with an average intensity of 42 per cent.

About 4.2 per cent of the population live in severe poverty. About 18.7 per cent of people, roughly the same proportion as in 2015-2016, are vulnerable to poverty because their deprivation score ranges from 20 per cent to 33 per cent. Two-thirds of these people live in a household in which at least one person is deprived in nutrition — a “worrying statistic”, it said.

The percentage of people who are poor is 21.2 per cent in rural areas compared with 5.5 per cent in urban areas. Rural areas account for nearly 90 per cent of poor people: 205 million of the nearly 229 million poor people live in rural areas — making them a clear priority. Noting that children are still the poorest age group, the report said that in India more than one in five children are poor (21.8 per cent) compared with around one in seven adults (13.9 per cent). This translates to 97 million poor children.

Children, the poorest age group, saw the fastest reduction in MPI value. The incidence of poverty fell from 34.7 percent to 21.8 per cent among children and from 24.0 per cent to 13.9 percent among adults.
Similarly, the poorest caste and religious groups saw the fastest absolute reduction in the recent period. This general pattern continues across the states and union territories.

Related Topics:
Sustainable Development
Up Next

India To Have Over 65 Per Cent Power Generation Capacity From Non-Fossil Fuels By 2030: RK Singh