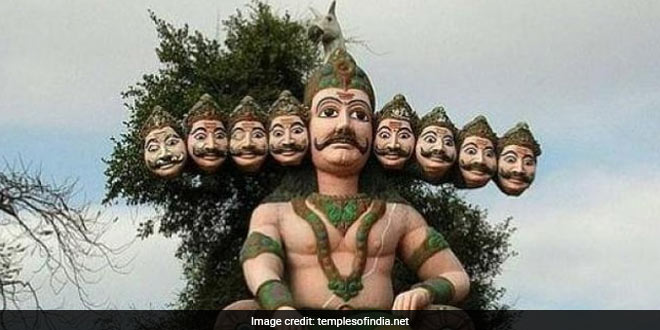 Noida: A 20-ft Ravana effigy made of plastic waste will be dismantled mechanically rather than being burnt, as is the tradition, during the Dussehra celebrations here on Tuesday to promote environment conservation. The effigy, which has been raised using 500 kg plastic waste, is installed at the Noida Stadium in Sector 21-A and would be disposed at a cement kiln later, according to officials of the Noida Authority.

The idea is to increase awareness against single-use plastic and is supported by the Cement Manufacturer’s Association of India, Noida Authority General Manager Rajeev Tyagi said.

This plastic-made Ravana effigy would not be burnt. It would rather fall down on the ground at the press of a button by the chief guest. The fallen effigy would later be taken to a cement kiln for its proper disposal in an environment-friendly manner, he said.

The Cement Manufacturers Association (CMA) is collaborating with the ministries of Jal Shakti, and Housing and Urban Affairs on various initiatives under the Swachhata Hi Seva’. One such premier initiative would help generate mass awareness and drive behavioural change. Noida is one of the five cities, including Delhi, where such an effigy is being made for Dussehra. Durga Shanker Mishra, Secretary, Ministry of Housing and Urban Affairs, said recently,

Single-use plastics can be disposed in cement kilns and there will be no environmental issues as it uses high temperature where hazardous gases get absorbed. I am very happy to hear about the plastic Ravana initiative on October 8 where CMA would showcase the process they are using to manage single use plastic waste.

Dussehra or Vijayadashmi, celebrated at the end of Navratri, symbolizes victory of good over evil.