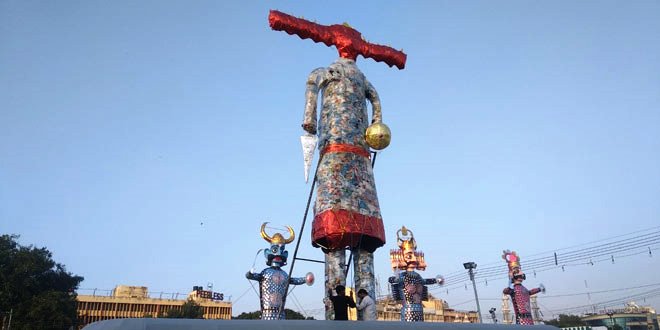 New Delhi: According to Hindu religious text Ramayana, Dussehra is the day when Lord Rama had eliminated king of Lanka, Ravana, who had kidnapped his wife, Goddess Sita. The festival is celebrated as a symbol of victory of good over evil. As a tradition, every year, effigies of Ravana are burnt at many places across the country to celebrate the victory. However, this year the Ministry of Jal Shakti, the Ministry of Housing and Urban Affairs and Cement Manufacturers Association (CMA) have collaborated to celebrate Dussehra differently with an aim to raise awareness on the evil of plastic by installing a 30-feet Ravana at Ramlila Ground, Delhi, made from single-use plastic waste.

Along with Delhi, the same experiment will be carried out at four other cities as well including, Noida, Raipur, Lucknow, and Ahmedabad. Each Ravana effigy is made from about 300 kilos of plastic waste that was bought from a number of ragpickers in each of the five cities. While talking to NDTV about the initiative, Mr Mahendra Singhi, President, CMA and Managing Director & CEO, Dalmia Cement (Bharat) Limited said,

We want to show that plastic is as bad as the evil demons for the environment and the society and nobody wants demons like Ravana to thrive in their country. We are all aware of the threat related to the use plastic but we continue to use due to the old habit. This Dussehra as we destroy the Ravana, we all must pledge to destroy the habit of using single-use plastic. 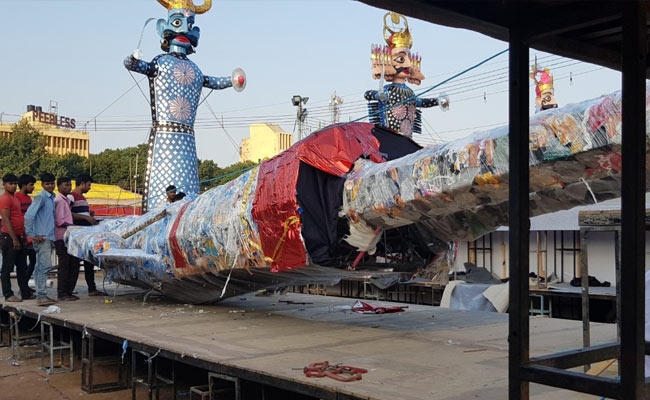 Along with the Delhi, similar plastic effigies of Ravana have been erected in Noida, Raipur, Lucknow, and Ahmedabad to celebrate Dussehra 2019 in an eco-friendly way

Mr. Singhi explained that the plastic effigy of Ravana will be disposed off mechanically in a cement plant through the process of incineration in the cement kiln. Thus the traditional act of burning the effigy in the public will be replaced by falling of the structure, transportation to the kiln and incineration under high temperature. Explaining the process, Mr. Singhi further said,

The effigy made from single-use plastic will be burnt in a controlled environment, at a temperature more than 1500 degrees Celsius. When any material is burnt at this high temperature, it loses its hydrocarbons and other impurities leaving no residues behind. So there will not be any air pollution. However, if the same plastic is burnt under random circumstances as we usually see in the open garbage burning cases, it pollutes the environment copiously. 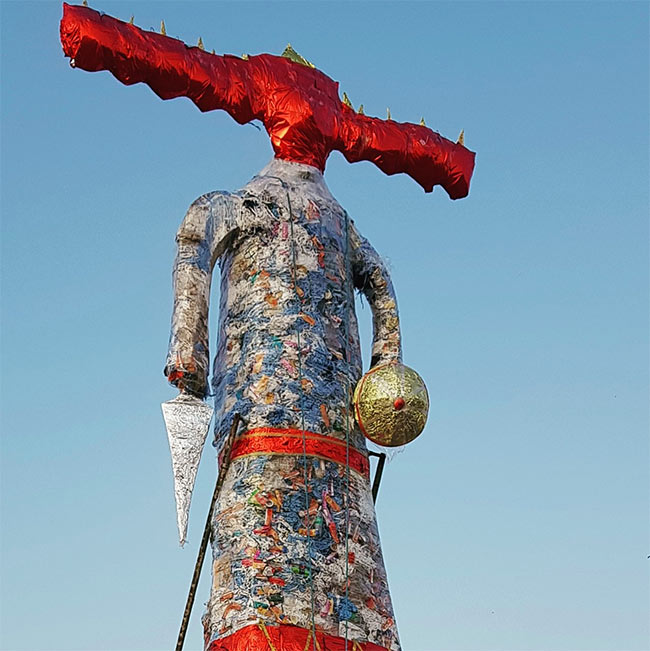 The cement factories across the country are also experimenting on using the plastic waste for generating energy so that burning of fossil fuels can be reduced for meeting the energy requirements at factories, said Mr. Singhi. This will not only reduce the problem of plastic waste and air pollution in the country but will also act as an economical energy solution for the cement companies.

The national drive to curb the use of single-use plastic was started by Prime Minister Narendra Modi on the Independence Day (August 15) when he addressed the nation and said,

During the subsequent days, states like Odisha and Madhya Pradesh have been working on cutting down the plastic waste by banning polythene bags at government offices and markets. High court campuses in Rajasthan and various domestic airports also banned the use of plastic carry bags and single-use items like straws and cups in the premises. Earlier in 2018, Prime Minister Modi had committed to eliminate single-use plastic from the country by 2022.

Say No To Plastic: Bangla Sahib Gurudwara Bans Use Of All Types Of Plastic Items