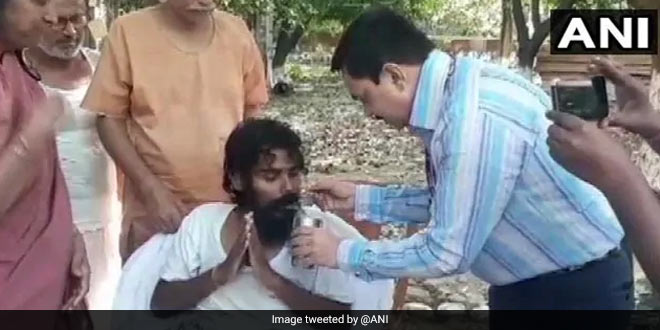 New Delhi: Ganga crusader, Ascetic Aatmabodhanand, was on a fast to save the holy river Ganga, has finally broken it on the 194th day. The activist decided do so after receiving written assurances from the National Mission for Clean Ganga (NMCG) that required steps will be taken by the authorities to rejuvenate mighty river.

The 26-year-old ascetic who is a computer science drop out from an engineering college in Kerala, broke his almost seven-month-long fast with a glass of juice, in the presence of Haridwar Sub Divisional Magistrate (SDM) Kusum Chouhan and other NMCG and Haridwar officials.

The activist who started the fast by giving up food, also decided to give up water to strengthen his protest in April. His major demands included a prohibition of new dam constructions on the river, setting up of an autonomous body of experts, decommissioning of all the existing dams on the river, passage of the Ganga Act, (which proposes concrete steps to rejuvenate the river) a stop to deforestation and a ban on mining in Haridwar as well as the other flood-prone areas of the Himalayan state. Ascetic Aatmabodhanand said,

NMCG Director General Rajeev Ranjan met me on April 25 and gave it in writing that steps will be taken regarding dams as discussed. He also gave an account of the actions being taken against mining.

It is a positive initiative of the government and NMCG, so, I have broken my fast for now.

In October 2018, the demise 87-year-old Ganga activist, GD Agarwal on the 112th day of his fast unto death, demanding a clean and free-flowing Ganga, angered activists nationwide while the authorities claimed to have met most of his demands.

According to Environmental Lawyer, M.C. Mehta, the major reason behind the high level of pollution in the river is that the natural/environmental flow (e-flow) of the Ganga has suffered extreme damage due to human interference. Additionally, toxic waste water discharge from industries, cities and agriculture contributes to the pollution of the river on a huge scale.

With inputs from ANI.

“No One Helped Us”: Family Of Labourers Who Died In Delhi Septic Tank