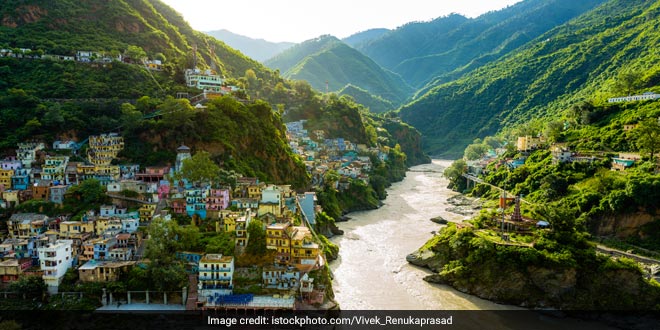 New Delhi: The Ganga is one of the longest rivers of India which flows through India and Bangladesh. The Ganga basin which covers the entire states of Uttarakhand, Uttar Pradesh (UP), Bihar, Delhi, and parts of Punjab, Haryana, Himachal Pradesh, Rajasthan, Madhya Pradesh, and West Bengal, accounts for almost one-fourth of the country’s total geographical area. The river is the lifeline of millions of people who live along its course and depend on it. Yet, it is the most polluted river in the Indian sub-continent. On the occasion of world water day, which is celebrated every year on March 22 to highlight the significance of clean and safe water, we bring to you the plight of the mighty Ganga by elaborating on what according to experts makes it dangerously polluted and how the government is addressing the issues related to Ganga.

The Lost Environmental Flow: Experts’ Take On What Ails The River Ganga

NDTV spoke with Ganga experts and environmentalists on the reasons leading to damage to the Ganga and how can the river be rejuvenated. According to Environmental Lawyer, M.C. Mehta, the major reason behind the high level of pollution in the river is that the natural/environmental flow (e-flow) of the Ganga has suffered extreme damage because of human interference. The e-flow which is the acceptable flow regime that is required to maintain a river in the desired environmental state has been lost in the Ganga river which according to Dr. Rajendra Singh, the waterman of India, is killing the river and harming the aquatic life.

Environmentalists like Dr. GD Agarwal, who gave his life fighting for Ganga, Dr. Rajendra Singh, Dr. Ravi Chopra, Lawyer M.C. Mehta, Gopal Das, Sunita Narian and many others had long been demanding that in order to rejuvenate the Ganga, its e-flow must be restored and discharge of wastes from cities into it be stopped- the ‘Nirmal’ (wholesome) and ‘Aviral’ (uninterrupted/ environmental flow). Dr. Rajendra Singh said,

Ganga has a unique property of cleaning itself provided it has enough water and uninterrupted flow. The Ganga supports a large variety of aquatic life-form and can even heal certain human ailments but the pollution level has increased to such an extent now that its water in the plains is not safe even for bathing, let alone drinking it.

According to Sunita Narain, Director, Centre of Science and Environment the Ganga is not any cleaner today, even after numerous efforts of the government. Since a lot of time has been lost already, the government, as per the experts needs to take a new approach towards saving Ganga curbing the waste entering Ganga and reducing pollution in it. Setting up of Sewer Treatment Plants (STPs) alone will not work, says Ms. Narain adding that the government needs to work along with Ganga activists and environmental experts to heal the river in a wholesome way.

What Pollutes The Ganga?

Hydropower Projects In The Upper Ganga Regions Disturbs Its Flow

According to Mr. Mehta, there are numerous hydropower stations, dams and barrages on the main stem of Ganga and on all its tributaries are harming the environmental flow of the river. Even deforestation is rampant along the stretches of the Ganga. Apart from this, construction and widening of roads and tunnels in the upper Ganga region by blasting the rocks also affect the water flow and leaves the riverbed dry. Mr. Mehta has termed this a “destructive model of development”.

To restore the e-flow, Ganga experts have demanded complete shutdown/ cancelation of all the dams and hydroelectric power projects built or are under construction on six headstreams of Ganga in the Himalayan region- Alaknanda, Dhauliganga, Nandakini, Pindar, Mandakini, and Bhagirathi.

The government is concentrating on cleaning the Ganga and not its rejuvenation. Improving the flow of the river is the most important way to rejuvenate it. Environment Impact Assessment must be done for each project running on the river, with utmost sincerity and site selection criteria must be laid down separately and specifically for the projects that can damage the river.

On the other hand, for the government’s point of view on the matter, we spoke with Sanjim Chima, spokesperson of National Mission for Clean Ganga (NMCG). As per Ms. Chima, the central government has finally notified minimum environmental flows of River Ganga that has to be maintained at various locations on the river. The environmental flow, which was ignored by the government for long, was notified for the first time on October 10, 2018. As per the notifications, the river needs to have at least the minimum required an environmental flow of water even after the river flow gets diverted by projects like irrigation, hydropower, and industrial use etc. According to another spokesperson of NMCG, while the government has finally taken a step towards restoring the e-flows, there are no projects undertaken by the government as of now and no funds have been allotted for this task.

Continuous Inflow Of Toxic Wastewater Has Made The Ganga No Better Than A Drain, Say Expert

The continuous inflow of untreated wastewater in the Ganga including the untreated sewage and toxic wastes from industries as well as agriculture runoff is worsening the water quality of the river. Mr. Mehta said,

The river is thick with faecal matter, heavy metals and harmful chemicals. It has become a sewage drain as more than 2700 MLD (Million Litres per Day) wastewater enters into the Ganga, most of which is not treated. It is no less than a dump yard for domestic and industrial effluents which have not only contaminated the river but also the groundwater of nearby regions. Considering the increasing footprints of urbanisation on the Ganga, there is an urgent need of enforcing the existing laws including the waste management acts, in a firmer manner.

According to the CPCB, three most polluted stretches in the river- the Haridwar Stretch, the stretch from Kannauj to Varanasi and the Dakshineshwar stretch. A report by CPCB in 2017 revealed that taking a dip in the river Ganga in Uttar Pradesh or Bihar could expose people to high levels of faecal coliform (FC) bacteria. The desirable level of FC bacteria in water is 500 MPN (most probable number)/100 ml and the permissible highest limit is 2500 MPN/100 ml.

Faecal matter, according to Mr. Mehta, finds its way into the Ganga through untreated sewage that seeps into the river. He recommends that with correct sewage management, the faecal pollution levels could greatly reduce for which the sewage must be treated a few kilometres away from the river and not just near it which will be helpful in keeping clean the groundwater of that area as well.

The government is already taking initiatives for sewer and industrial waste management. Under the Namami Gange Programme, 131 projects have been sanctioned for the development of new sewage treatment plants (STPs) that can process more than 900 MLD of sewage.

Another major reason behind the high rate of pollution in the river is sand mining which according to Mr. Mehta is mostly illegal and at a huge level. He said that sand mining is destroying the river bed, causing erosion and polluting the river massively. The activists working on the issues of Ganga have demanded from the government, a complete ban on any kind mining in the riverbed of Ganga especially in the ‘Kumbh Mela’ region of Haridwar. While currently, the government does not have any specific programme for curbing mining in Ganga riverbed, Ms. Chima said that the government is working on a new law for rejuvenation of Ganga which may have provisions for penalising illegal miners.

Talking about the damage being caused by river transports, Ram Dheeraj, a Ganga expert and activist highlighted that the multi-modal commercial river navigation terminal on Ganga River in Varanasi which was inaugurated by Prime Minister Narendra Modi in November last year, is harmful for the Gangetic Dolphins and other aquatic animals. Ram Dheeraj said,

Ganga does not have the depth and width to contain the large vessels, it will be degraded even further as a lot of erosion will be caused in the process of dredging in order to make way. Apart from this, the strong vibrations of the large vessels and loud noises will make it difficult for the aquatic fauna like dolphins and sea-horses to survive.

Namami Gange project or the Integrated Conservation Mission for Cleaning Ganga, to clean up the Ganga River, was launched in 2014 with a budget corpus of Rs. 20,000 crore for five years, 2015-2020 and is being implemented by NMCG (National Mission For Clean Ganga) in conjunction with its state counterparts- State Programme Management Groups (SPMGs).

Namami Gange has been one of Prime Minister Narendra Modi’s pet projects since its inception. However, in the last five years, only 87 projects have been completed out of 289 sanctioned projects, as per NMCG’s project progress report for February. Out of the completed projects, maximum are projects for building STPs while others include ghats & crematoria development, riverfront development, river surface cleaning, institutional development, biodiversity conservation, afforestation, rural sanitation, and public participation.

The report further reveals that till now, only Rs. 6368.09 crores have been utilised which is only 22.4 per cent of the total sanctioned amount of Rs. 28366.8 crore. In 2017, the performance audit of the project (From its launch till 2017) by the Comptroller and Auditor General (CAG) of India in 2017 found serious shortfalls in almost every component of the program. The May 2018 report of the World Bank also called ‘Implementation Status and Results Report’ had called the Namami Gange project “Unsatisfactory”.

Responding on the slow progress of the project even after claims made by the Union minister for water resources Nitin Gadkari, multiple times that the Ganga will be 100 per cent clean, Ms. Chima said,

We are working relentlessly for cleaning the Ganga and ensuring e-flows but you cannot expect Ganga to be cleaned in a day. There’s no magic wand that can do this. This is a huge task that needs time, the timeline for Namami Gange is 2020 and we can guarantee that by then all the projects will be completed as all of us at National Mission for Clean Ganga are working in a mission mode now.

Also Read: Kumbh Mela: Special Arrangements Made For Cleaning The Drains In Prayagraj

Related Topics:
Ganga Namami Gange River Clean Up
Up Next