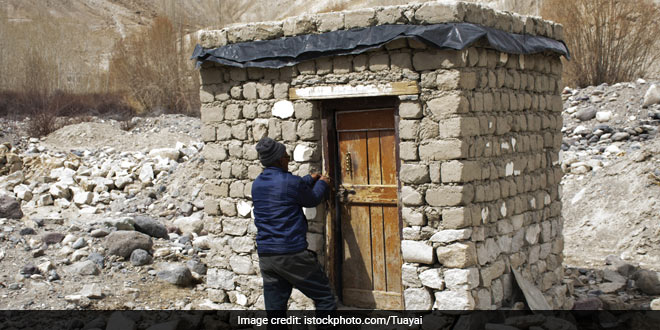 New Delhi: A recent Comptroller and Auditor General of India (CAG) audit survey of toilets constructed in schools by Central Public Sector Enterprises (CPSEs) revealed that 30 per cent of the toilets constructed were not in use due to various reasons like lack of cleaning and running water facility. The survey also revealed that wash basin or hand wash facility was not available in 1,279 (55 per cent) out of 2,326 toilets surveyed. The audit survey tabled in the Parliament on September 23 was conducted between September 2017 and January 2018.

The audit survey holds significance as it raises a question mark on the open defecation free (ODF) by 2019 goal of the Swachh Bharat Abhiyan and serves as a red flag to the reopening of schools amid the ongoing COVID-19 pandemic, when hand washing and hygiene are the best defence against the Coronavirus.

On August 15, 2014, when Prime Minister Narendra Modi initiated Swachh Bharat Mission (SBM) with an aim to achieve clean and ODF India by the 150th birth anniversary of Mahatama Gandhi on October 2, 2019, he also announced the construction of toilets in schools. PM Modi had promised to construct separate toilets for boys and girls in all schools, within a year. PM Modi had called upon private sector to chip in through their Corporate Social Responsibility (CSR).

Following this, the Ministry of Human Resource Development launched Swachhh Vidyalaya Abhiyan (SVA) which sought cooperation of Central Public Sector Enterprises (CPSEs) in the construction of toilets in government schools.

As per MHRD and the Swachhta Status Report (2016) of the National Sample Survey Office, under the Ministry of Statistics and Programme Implementation, 53 CPSEs participated in the SVA and constructed over 1.4 lakh toilets (1,40,997).

For the audit survey, seven CPSEs which constructed more than 5,000 toilets each were selected. In total, audit drew a sample of 2,695 toilets in 2,048 schools located in 15 states.

Also Read: “Building Toilets Is Not Enough To Eradicate Open Defecation,” Experts Stress On The Need To Maintain The Toilets in Delhi

Here Are The Top Findings Of The CAG Audit Survey

Recommendations Of The Audit Survey

Audit is of the opinion that CPSEs should consider signing Memorandum of Understanding with state or District Education Departments for providing running water facility to the toilets and maintaining them. CPSEs should provide necessary funds for maintenance and closely monitor the outcome of such maintenance, recommends the report.

The report has called the ministries to look into the issue of non-existing or incomplete toilets, which were claimed as constructed and also address absence of basic amenities in the toilets. For sustaining the usage of toilets, ministries or CPSEs need to sort out the issue of regular maintenance of toilets.

For effective monitoring, CAG has suggested to opt for geo-tagging of photos.

Experts Take On The Findings Of The Audit Survey

Varun Dutt, Assistant Vice President – Research at Sambodhi Research and Communications raised concerns over the fact that 55 per cent of the audited schools do not have a handwashing facility. Linking the findings to the COVID-19 pandemic and reopening of schools, Mr Dutt, said,

Ensuring availability of handwashing facilities and functional toilets should be a non-negotiable prerequisite for reopening of schools. School preparedness on these aspects should be monitored on priority basis.

In addition to this, V R Raman, Head of Policy at WaterAid India, said that the quality issues and other concerns raised by the CAG are definitely worrisome, but it doesn’t add much to the already existing challenges of getting our schools ready for the pandemic. Mr Raman said,

CAG report can build national attention to a much important issue, and it will be useful if this attention is able to catalyse the much-needed change in the situation, in terms of ensuring safe, accessible and quality sanitation facilities in all institutional premises, addressing the needs of all genders and specific vulnerable groups. In fact, the reopening of schools during COVID-19 requires much more facilities than in the ordinary situation.

Further talking about the target of SVA (Swachhh Vidyalaya Abhiyan) and the ground reality where 11 per cent of the toilets surveyed were either non-existent or partially constructed, Mr Raman said,

The ongoing phase 2 of the Swachh Bharat Mission should prioritise this issue in a systematic manner and build a focussed approach towards achieving necessary WASH standards in the schools and institutional premises. We need to keep in mind that we have to also build pandemic as well as disaster resilience in these institutional spaces.

Giving suggestions on filing the crucial gaps in claims made by CPSEs and the toilets constructed in reality, Mr Dutt said,

The government should direct the responsible stakeholders including CPSEs and state government agencies to look into these irregularities and also conduct internal audits for the remaining 98 per cent constructed toilets. The implementation agencies should be held accountable and the contracts should have penalty clause for inconsistencies observed between the toilets claimed to be constructed and actually constructed. As a long-term solution, leveraging technology (having a centralized Management Information System with geo-tagged photographs uploaded for each site and use of dynamic dashboards for progress tracking) for concurrent monitoring and third party evaluations are essential for achieving effectiveness of large scale programmes like SVA.

In addition to this, Mr Raman suggested no further delay in providing basic and essential facilities in schools owing to procedures and recoveries. He added,

The need as of now should be to identify all those schools which are lacking the essential WASH facilities, and to prioritise provision of these in all those institutions, including the ones where gaps or discrepancies have been found.

Further talking about the steps required from the government’s end to address the issue of poor usage of toilets due to lack of running water and other facilities, Mr Raman said,

One of the critical guidance of the 14th finance commission for local governments was that they should prioritise water and sanitation at community level, schools, Anganwadis and health care facilities. However, while looking at the utilisation patterns of the money allotted under 14th finance commission, we may not see the prioritisation of these issues. The available allocation under Swachh Vidyalaya or similar schemes is not adequate to meet the prescribed standards of WASH facilities, which are even higher during the pandemic. Operations and maintenance of available infrastructure is an issue too. Considering this, fixing the WASH infrastructure responsibilities with the local governments might improve the WASH situation in schools and institutional premises.