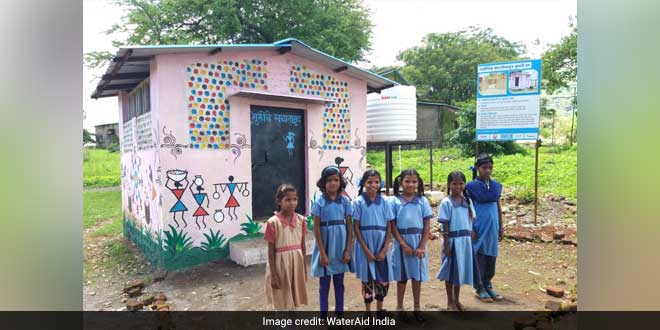 New Delhi: About one million single-use plastic drinking bottles are purchased every minute across the globe, according to United Nations Environment Programme. With growing concern about how to cut down on the menace of plastic waste one of solutions gaining ground is using discarded plastic for construction. Nashik’s 41-year-old Vaitarna Ashramashala residential school comes under the administration of Maharashtra’s Tribal Development Department.

It has 254 boy students and 35 girl day scholars, belonging to the local tribal communities. Despite having a reservoir – Vaitarna Dam – nearby, the Vaitarna Ashramshala did not have any running water supply system, due to which students lacked basic water, sanitation and hygiene (WASH) infrastructure. Also, owing to the less number of girl students, there was no provision for a separate toilet for girls and they had no option but to use the boys’ toilet during school hours. This was not benefitting either of the genders. Boys often opted for open urination in the absence of proper infrastructure.

Talking about what made them take up this project, Rema Mohan, CEO of the NSE Foundation told NDTV,

NSE, The Tribal Development Department (TDD), Government of Maharashtra and UNICEF, Mumbai jointly are a part of the ‘Clean Maharashtra: Clean Ashramshala’ Campaign. At NSE Group, CSR projects seek to the reach the most disadvantaged and this particular project appeared as a high priority case to be taken up. 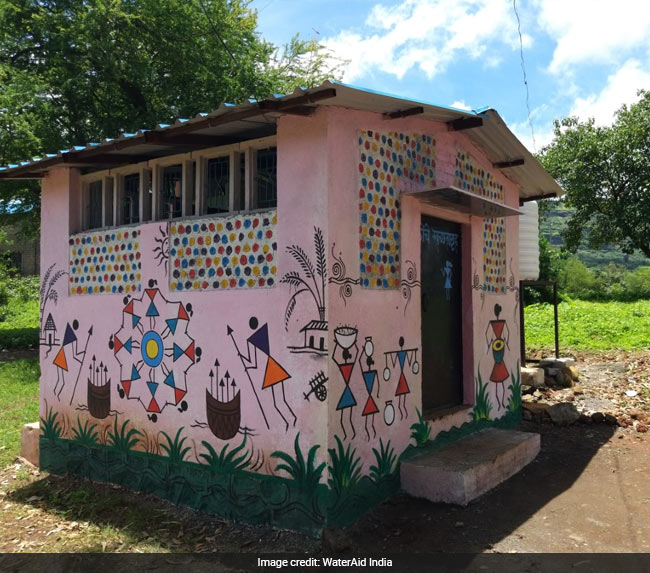 Building The Toilets Using Plastic Bottles And Bamboo In Nashik

WaterAid India was already associated with the school for facilitating clean water and hand wash basins. But lack of separate toilets for girls was a bigger problem faced by the school and thus the school administration approached us to help them in constructing a low-budget toilet. Ideally, to ensure a proper WASH infrastructure, for every 20 girls, there should be one urinal, Abhijit Aawari, Project Officer for WaterAid India told NDTV.

Abhijit further explained how waste bottles to construct one toilet complex with two squatting pan urinals and one wash basin, were used, he said,

Taking the low-budget into consideration, a new approach was needed to reduce the cost of construction. We drew inspiration from the environmental conservative approach and principles of Architect Laurie Baker, and used waste plastic bottles to replace the conventional bricks in the construction to cut the cost. Nearly 3,500 bottles were used, collected from the nearby Municipal Councils namely Trimbakeshwar, Akole and Igatpuri. We used random rubble stone during the foundation construction, arranged in a way to be cost effective.

To reduce the cost further, locally available bamboo was used for reinforcement in the internal walls. Bamboo has more weight to strength ratio and gives more strength as compared to the conventional brick wall and also consumes 30 per cent of the carbon from the atmosphere.

These urinals have greatly benefitted the students and play a major role in facilitating adequate WASH infrastructure for them. Talking about how having this toilet in school made her life easy, Akanksha, a student from Vaitarna Ashramashala shared,

The urinal is really helpful for all of us since previously we had to go far away to the old toilet, which was not in a good condition. Now we can use this new toilet, I like the paintings on it and have also told my parents about it.

This toilet built by WaterAid India is well ventilated, equipped with electricity and water supply and has also been painted with Varli painting, which gives it an aesthetic look. We’re glad that we now have sanitation facilities for all the females of our school – students and teachers.

Talking about the initiative and why children are the real ‘agents of change’, Binu Arickal, Regional Manager (West) at WaterAid India said,

I think children are effective change agents who take back water, sanitation and hygiene related learnings and behaviours thus creating a change in the entire community. We tried out a different model in Vaitarna Ashramshala and ensured children participation right from planning stage to letting them fill bottles with sand and soil during the construction stage. This not only helped ensure greater ownership of children for this toilet structure but also sensitised them towards reuse of waste materials in creating something unique. As a result, the acceptance of this toilet in students is extremely high.

Thanks to the stakeholders from various sectors realising the necessity of sanitation and hygiene among children, girls from Vaitarna Ashramashala now have a safe access to toilet. The stakeholders from this project are presently working in 172 Ashramshalas through Nashik and in 3 years they aim at making them all WASH compliant benefitting approximately 70,000 children.

The Less We Use Plastic, The Better For Us, Nature, Air And Water, Says Vicky Kaushal