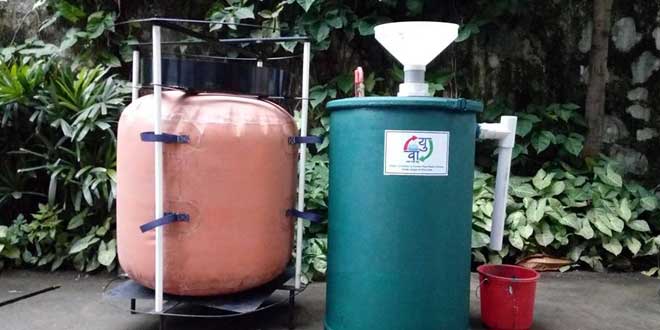 New Delhi: 34-year-old Priyadarshan Sahasrabuddhe, a Pune based engineer is trying to provide a solution for two of the biggest environmental problems facing India – air pollution and burgeoning waste pile ups. The IIT-Bombay alumnus has launched a technology to produce cooking gas fuel by repurposing the organic-waste produced in the kitchen and at the same time reducing the dependence on fossil fuels. In 2017 he created ‘Vaayu’, a biofuel plant that can be easily installed at homes to convert carbohydrates from organic waste into methane gas which can be used for cooking and heating purposes.

“I was working at my parent’s firm about two years ago and I noticed that every day after lunch, a lot of leftover food used to end up in the garbage bins. Watching all that food go waste, I thought of trying composting to manage that waste. But it was not enough. On researching more, I came to know about biofuels. I found that not only will it help in managing organic waste, it will also help in reducing our dependence on non-renewable sources like LPG,” said Mr. Sahasrabuddhe

With the help of ‘Vaayu’, he is able to produce about 800 litre of biogas every day which is enough to meet more than 70 per cent of the fuel need of his house saving him about six LPG (Liquid Petroleum Gas) cylinders every year. Mr. Sahasrabuddhe started his “green fuel” journey by approaching the neighbours in his building and explaining to them the importance of segregating waste and also how they could help him set up a biofuel system. According to him the organic waste is not a problem and is actually a solution to the energy problem. Instead of sending the waste to the landfill, organic waste can be reused to produce fuel for cooking.

“Waste segregation is the key here. Initially, when I started advocating for green living, I used to go to each house in my locality every morning to ask them to segregate their waste. There were days when I myself used to pick organic waste from the nearby garbage dumps. But gradually when my neighbours started to understand ‘Vaayu’, they started segregating and I get almost 8- 10 kgs of organic waste at my doorstep every day,” said the engineer turned innovator.

After a long period of testing of the device at his home and reducing his dependence on LPG to a significant extent, Mr. Sahasrabuddhe pushed others in his family, neighbours, and friends to start using this innovation. Till date his startup has done 135 installations in Pune, Sangli, Aurangabad, Umarkhed (District Yavatmal), Palghar, Nashik and Hyderabad. These installations together are managing upto two ton of food waste per day and saving about 900 LPG cylinders worth fuel per year.

How Does ‘Vaayu’ Work?

‘Vaayu’ is a domestic bio-gas machine which can be installed in the house, in the gallery, on the terrace or in the garden. The apparatus is fuelled by the waste generated in the kitchen which gets broken down by bacterial action known as Anaerobic Bacterial Digestion. Through this process, the carbon dioxide captured inside the organic waste during photosynthesis is divided into methane gas and liquid. The gas is stored in the balloon kind of a structure called the cylinder which is connected to the stovepipe. The cooking experience is exactly the same as that of a regular LPG or piped CNG (Compressed Natural Gas). The slurry generated in this process is high on nutrients and can be utilised as manure for the plants in the house.

The regular size ‘Vaayu’ has a container of two kg capacity in which the organic waste is put. A single two kg container, ‘Vaayu’ produces 200 litres of biogas within 24 hours which is 40 minutes of cooking gas per day saving up to three LPG cylinders per year. The capacity of the device can be increased by adding the containers.

The device requires cleaning up once in six months. The solid undigested material removed is fibrous and can be taken back to the garden as manure. Currently, the cost of installing ‘Vaayu’ is Rs. 20,000 but the operating cost is zero. There is no need of power to run ‘Vaayu’ as it operates on its own. Mr. Sahasrabuddhe is still working to improve the technology to make if more affordable.

Mr. Sahasrabuddhe has also started an informal community of like-minded nature enthusiasts who come up with innovative solutions and want to share them with others. The community, ‘Vaayu Mitra’, provides biofuel solutions according to the number of people residing in a house and encourage them to adopt a greener lifestyle. He says,

In my society, everyone segregates their own waste now. I and my friends are working also with waste collectors and are training them to operate biogas plants so that they become energy suppliers too. This increased value will help them earn better remuneration.

He further said that disposing of garbage is a global problem and if each one of us can treat their waste in the premise of their residence, it can create a significant impact on the environment. It’s an effort that solves the problem of waste management and reduces the burden on the landfills and public systems. He said, when you using a biogas plant may not be the best solution to combat pollution, but it can certainly stop the burning of fossil fuels. Whether it is lessening our carbon footprint or an attempt to save a few thousand rupees every year, efforts like utilising waste for generating energy needs to be made popular. He said it is a matter of understanding and having a more responsible outlook towards the environment.

Also Read: After Facing The Wrath Of Municipal Corporation, This Housing Society In Mumbai Takes Up The Challenge To Treat Their Own Waste