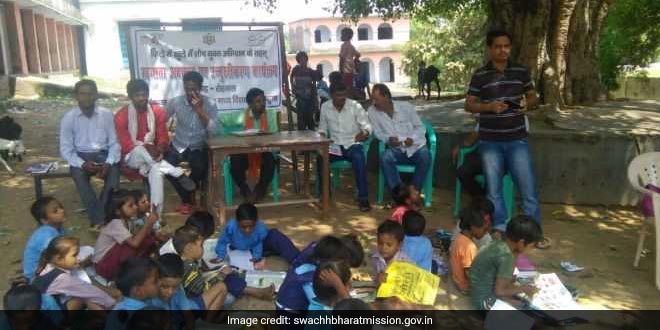 In the district of Rohtas in western Bihar, the premises of district officials are frequented by a medium-sized crowd every Saturday. Rohtas, which is on the verge of becoming Bihar’s first open defecation free (ODF) district, sees the crowd, gather on Saturdays as part of the community court or Swachhta Adalat set up by the district administration to ensure that open defecation becomes a thing of the past in the district.

Bihar’s poor performance in the Swachh Bharat Abhiyan, ever since the mission’s launch in 2014, has been a cause for concern for the Abhiyan. The sanitation coverage of the state rests at 32.96 per cent, less than half of the national average of 70.23 per cent. Despite the severe lag in sanitation coverage, Bihar is hoping that the ODF status of Rohtas will bring an optimistic change in the state and will escalate its performance under the Swachh Bharat Abhiyan. With 2,088 villages and a population of over 24 lakh, Rohtas has done quite well to achieve nearly 93 per cent sanitation coverage. The Swachhta Adalat looks at people who continue to defecate in the open and address the reasons for the existence of the practice.

Since our district is on the verge of becoming the first ODF district in Bihar, we wanted the district to be truly devoid of any open defecation practices. This court has been set up specifically to keep a tab on those who practice open defecation despite having access to toilets and try and convince them not to do so, said Animesh Parashar, District Magistrate, Rohtas.

The idea of setting up a community court to monitor the sanitation status came to Mr Parashar when he heard reports of people practicing open defecation in villages which were already declared ODF. Earlier, when Mr Parashar had taken over as the district magistrate in 2016, he appointed nearly 700 motivators across the district, who would go from village to village and spread the message of toilet construction. The remarkable turnaround in the sanitation fortune of Rohtas was possible because of the continuous work done by motivators, who continuously followed up on the work done by respective blocks and panchayats.

It was in August 2017, when reports started coming in that despite the presence of newly built toilets at homes, open defecation remained a recurring practice in some villages. Reasons included less supply of water, fear of incurring high costs of maintenance due to over usage and inability to give up the practice of defecating in the open for so many years. Despite the announcement that those who would be found defecating in the open would be fine Rs 1,000, the practice continued in some pocket of Rohtas

When the news came in that some people were still defecating in the open, I decided to set up a common meeting ground where the village heads of all the villages would meet every week and discuss the reasons why some people in their villages were continuing the practice, said Mr Parashar.

The community court started functioning from the beginning of September and has been held every week since then. The court discusses the issue of prevalence of open defecation and through these discussions, solutions related to ODF sustainability come up. The court also acts as a meeting place for grievance sharing and the district administration has followed up court meetings with addressing the issues of providing incentives to those who build toilets and ensuring timely disbursal of funds.

The idea is not to convince people to use the toilets they have built. The court is a good platform for them to share sanitation issues and come up with suggestions as to what can be done to sustain the ODF status for villages, said Mr Parashar.

More than 200 of Rohtas’ 245 villages and 14 of its 19 blocks have been declared ODF. The district, which was supposed to become ODF by October 2 this year has missed its deadline, but plans to achieve the status by November this year. The delay is due to certain villages not becoming ODF yet but the district administration is confident that with due intervention from the Swachhta Adalat, Rohtas’ dream of becoming Bihar’s first ODF district is well on its way to become a reality.