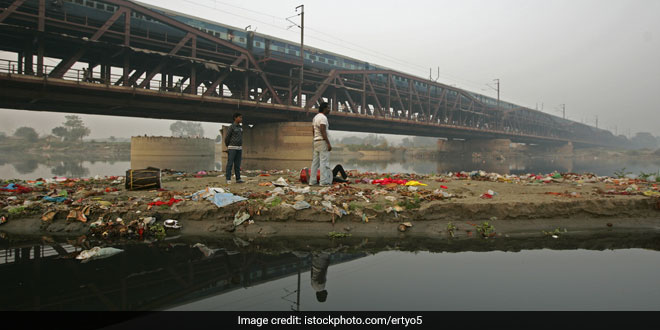 New Delhi: Absence of sewer networks in over 1,500 unauthorised colonies and slums in Delhi is one of the major reasons of pollution in the Yamuna, according to the monitoring committee overseeing the cleaning of the river. The committee has directed authorities to come up with a plan for preventing pollution from these sources and for proper disposal of faecal sludge and other wastes, according to an action plan for rejuvenation of the Yamuna river, prepared by the body.

The National Green Tribunal had in July formed the monitoring committee and directed it to submit by December 31 an action plan on cleaning of the river. NGT Chairperson Justice A K Goel appointed the retired expert member B S Sajwan and former Delhi chief secretary Shailaja Chandra as members of the committee, while directing them to submit the action plan and detailed report.

The monitoring committee in its action plan, accessed by the PTI, has expressed concern over the absence of sewer networks in over 1,500 unauthorised colonies and slums of Delhi, calling it one of the biggest reasons of pollution in the river. Delhi has 1,797 unauthorised colonies that have a population of about 40 lakh, which is growing, the report said.

There is no regulated system of emptying their septic tanks and faecal sludge that contain very high levels of coliform and get deposited in drains and water bodies which ultimately pollute the river, it added. The monitoring committee has said in the report that only about 14 per cent of the 1,797 colonies have been provided sewage pipelines.

But, even there “the offtake is extremely poor as the residents are reported to be unwilling to pay the charges,” it said.

The monitoring committee has said that about one-third of the population of Delhi is still dependent upon the septic tank. It has directed the Delhi government to notify regulations of septage management under which responsibility of each and every person involved should be fixed so that the sewage could get properly treated in an aligned manner.

The committee has also directed the Delhi Jal Board to immediately provide to the Central Pollution Control Board and the DPCC connectivity to their servers for real time monitoring of quality of treated water from each sewage treatment plants. The committee has reviewed the sanitation situation with all authorities and issued comprehensive directions which include, among others, asking the CPCB and DPCC to designate scientists or engineers within their organisation to be responsible for monitoring online reports from DJB and send SMS alerts to the jal board DJB for corrective action.

The committee has also directed the DJB to ensure online connectivity for data transfer to all STPs.

The Commissioners of DMCs (municipal corporations) have a primary duty for sanitation in the whole of the municipal area. Therefore, each DMC Commissioner has been directed to submit an action plan for prevention of such pollution, it said.

It has been directed to first cover all drains nearest to the three major drains which empty into the river.

The DJB now says the government will be paying for the connections but there is no such policy on paper or funding or funding or time lines, it said.

It pointed out the Delhi Jal Board has power to impose a fine of up to Rs 5000 for discharging filth and garbage into the drains.