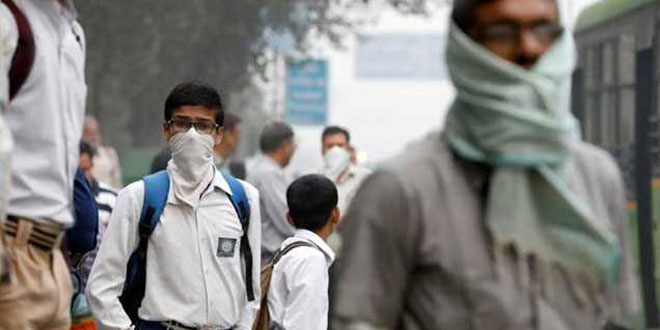 New Delhi: As air quality in the national capital continues to be “poor”, the Supreme Court has reprimanded the centre and civic agencies for lack of action in pollution-related complaints. The court said that the local agencies – the municipalities — have failed to address the grievances of the citizens and lax officials should be put behind bars. The centre informed the court that 749 pollution complaints were received through social media and over 3,000 through the “Sameer” app, a mobile application launched by the Central Pollution Control Board (CPCB) to enable people to register their complaints, between November 1 and 24.

Some complaints have been dealt with, but others are pending because they have to be addressed by local agencies, the centre said. “Prosecute the local agencies. Send them to jail. That is the only option left,” the top court said.
Will do, said the centre. On Monday, the air quality in Delhi-NCR deteriorated to “very poor”. In some parts of the city, the pollution levels plunged to “severe”.

Among desperate measures being considered to handle the air crisis is the artificially induced rain to wash away and clear pollutants from the air. Union Minister Mahesh Sharma said that the centre will send out a notification to induce artificial rain or cloud seeding in the national capital if the pollution aggravates.

Cloud seeding is the process of combining different kinds of chemical agents, including silver iodide, dry ice and even common table salt, with existing clouds in an effort to thicken them and increase the chance of rainfall. The process also involves changing the amount and type of precipitation that falls from clouds by dispersing substances (mostly salts) into the air. The dispersion is done from aircraft.