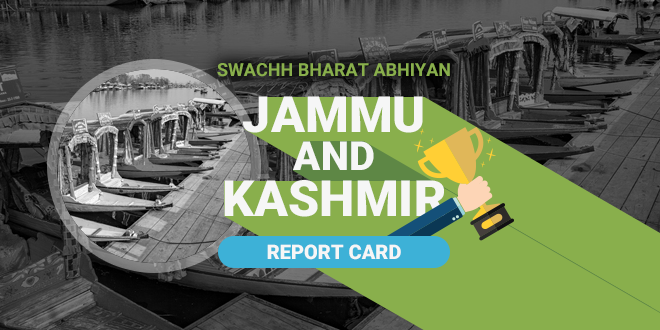 New Delhi: Sanitation in Jammu & Kashmir (J&K) is among the worst in India, with around 59 percent of households without a toilet. According to the data available on Swachh Bharat Mission dashboard, over 2 lakh (2,02,238) individual household toilets were constructed in rural J&K after the launch of Swachh Bharat Abhiyan in 2014. In the last three years, the state’s sanitation coverage has improved only to 40.97 percent from 20.38 percent in 2014. Only Bihar with sanitation coverage of 32.41 percent seems to be doing worse. Though the J&K government’s aim is to go open defecation free (ODF) by October 2019, but the track record so far, does make the target seem like a tall order. Only 412 villages out of 6694 are ODF, which calculates to just 6.15 percent of the total villages. Even the sanitation situation in urban areas of the state is not very promising too as only 1,851 individual toilets have been constructed against staggering 80,458 applications, as per the Swachh Bharat Mission dashboard. So what is the reason behind this poor performance and why are the government’s efforts to improve sanitation by constructing toilets not showing results? 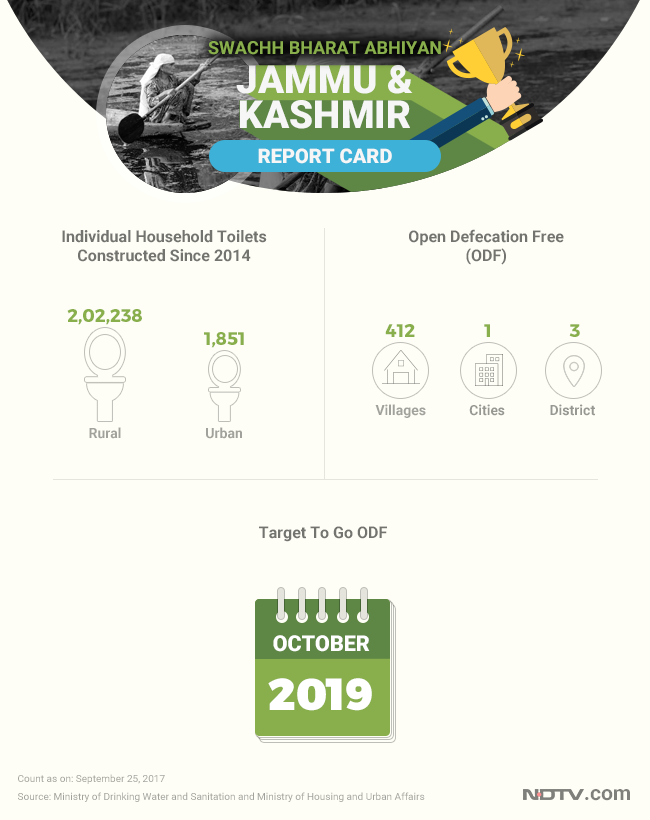 M.M Rehman Ghasi, Director, Rural Sanitation, Jammu & Kashmir, says the lack of sanitation awareness among people living in rural areas is not just the only factor behind the state’s poor sanitation scenario. The law and order situation in Kashmir, along with connectivity issues and communication (telecom) barriers in the remotest villages, also plays a factor for the limited sanitation coverage.

“The model of Information, Education and Communication (IEC) to ensure behavioural change among people, to stop open defecation and use toilets is being adopted in the state. But due to law and order situations and security concerns, we sometimes have to restrict our sanitation awareness activities. Measures are being taken by the government to ensure the construction of individual household latrines (IHHL) in the villages,” said Mr Ghasi.

When asked if the topography posed any challenge in constructing the toilets, he stated that it is bit difficult for officers to reach each and every household due to connectivity concerns but everyone is putting in their best efforts to end open defecation.

“In this financial year, the government has sanctioned Rs. 147 crore, out of which Rs. 73.91 crore have been utilized for providing toilets to people in rural areas,” Mr Ghasi added.

While speaking to NDTV, Mr Ghasi also stated that due to irregular internet connectivity, the local officers covering the sanitation programme face problems in real time updating the data related to toilet construction on the Swachh Bharat Mission dashboard. As per the figure provided by Mr Ghasi, the sanitation coverage in the state stands at 52 percent.

In addition to schools, there are other examples as well which show some signs of hope in the otherwise dismal sanitation scenario. One such example is Reasi, the first block in J&K to be declared open defecation free. Reasi comprises 13 panchayats and is a remote area with tough topography, where women took out torch rallies, went from house to house, street to street and inspired people to stop defecating in the open and build toilets. Notably, over 4,000 toilets were constructed in Reasi in the span of three months, confirmed Ravinder Kumar, Deputy Commissioner, Reasi.

Even Prime Minister Narendra Modi on his monthly radio programme ‘Mann Ki Baat’ applauded this feat and congratulated women for being on the forefront and putting in relentless efforts to spread awareness about the ill effects of open defecation.

“I wish to congratulate the people of Reasi Block and also the public servants of Reasi Block. I felicitate the mothers and sisters of Reasi from the bottom of my heart,” said Prime Minister Narendra Modi.

Another motivating example comes from Jammu & Kashmir’s Leh district, which is one of the three districts along with Kargil and Srinagar to become open defecation free. The district, achieved this feat with the use of dry compositing toilet, which processes human waste on the spot and turns it into manure in 15-20 days. Parameswaran Iyer, Secretary, Ministry of Drinking Water and Sanitation also tweeted to congratulate the district for achieving this challenging feat.

In Jammu, where the law and order situation is relatively under control as compared to other regions of the state, a total of 13,112 applications to construct individual household toilets were received. Out of which 11,514 applications have been verified by the government and 6,186 applications have already been approved.

The Katra town in Reasi district is the epicenter of the Mata Vaishno Devi Shrine and one of the landmarks shortlisted as part of the Swachh Iconic Places initiative to uplift the cleanliness levels to match international standards. The officials while preparing a planning report for Katra observed that the condition of the existing public toilets were not that good. Considering large share of the floating population (mostly Mata Vaishno Devi pilgrims) comes to Katra every day, the government is planning to add more public toilet facilities, especially in commercial areas of the town. According to the data available on the Swachh Bharat Urban dashboard, the government has approved 339 of the 347 applications received to construct individual household toilets in Katra.

Jammu & Kashmir government, which aims to make the state open defecation free by October 2019, in its annual implementation plan under Swachh Bharat Mission (Gramin), has laid emphasis to speed up the construction of individual household toilets. The government has also made it mandatory for all government employees, including the teachers, police personnel, anganwadi workers among others to have a toilet at home. Underscoring the importance of Swachh Bharat, the government has asked all the stakeholders to improve the sanitation coverage and has appealed all the Deputy Commissioners of the state to personally monitor implementation and increase their efforts at the district level.

With Rural & Urban Tamil Nadu Having 75% Plus Sanitation, The State Aims To Go Open Defecation Free By March 2018