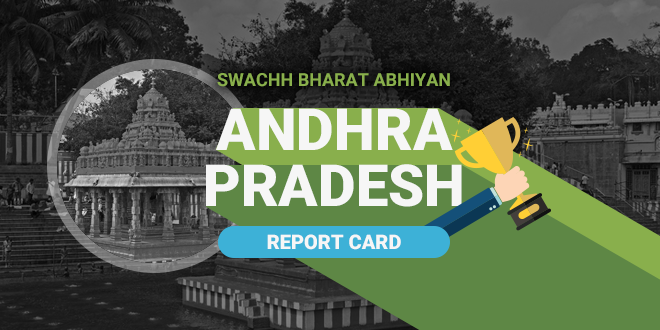 New Delhi: With all its municipalities declared open defecation free (ODF) in October 2016, Andhra Pradesh, which has been faring well in terms of its sanitation coverage in the urban areas, but is lagging behind when it comes to rural areas. Despite the construction of over 19 lakh household toilets (19,02,258) and around 5,325 villages declared ODF, the rural sanitation coverage of Andhra Pradesh still stands at 60.7 percent, witnessing an improvement of just 26 percent since the launch of Swachh Bharat Abhiyan in 2014. Of the 13 districts, only two (West Godawari and Nellore) have managed to provide toilets to all households.

On the contrary, all the 110 cities and towns in the state are open defecation free, making it the second state after Gujarat to declare all its municipalities ODF. This achievement even entitled Andhra Pradesh to earn an incentive of Rs. 185.97 crore from the central government, along with words of appreciation from then Minister of Urban Development M Venkaiah Naidu. Notably, eight of Andhra Pradesh’s 32 urban local bodies (ULBs) that participated in Swachh Survekshan 2017 were ranked among the top 50 clean cities, making it the third state, with the highest number of clean cities or towns in the country after Madhya Pradesh (23 cities) and Gujarat (22 cities).

Also Read: A Toilet In Every Home, Gujarat Fulfill Its Dream, Will Be The Next State To Achieve Open Defecation Free Crown

While speaking to NDTV about how Andhra Pradesh managed to make all its 110 cities ODF, the Managing Director of Swachh Andhra Corporation D. Muralidhar Reddy said, “At the time of starting the work to making cities ODF, we had the task to first repair over 2 lakh toilets which was done effectively in short time”.

Over the period of two years till October 2016 when all the 110 cities were declared ODF, we constructed close to 1.6 lakh individual toilets, 5,464 community toilets and 1,870 public toilets, Mr Reddy further added. 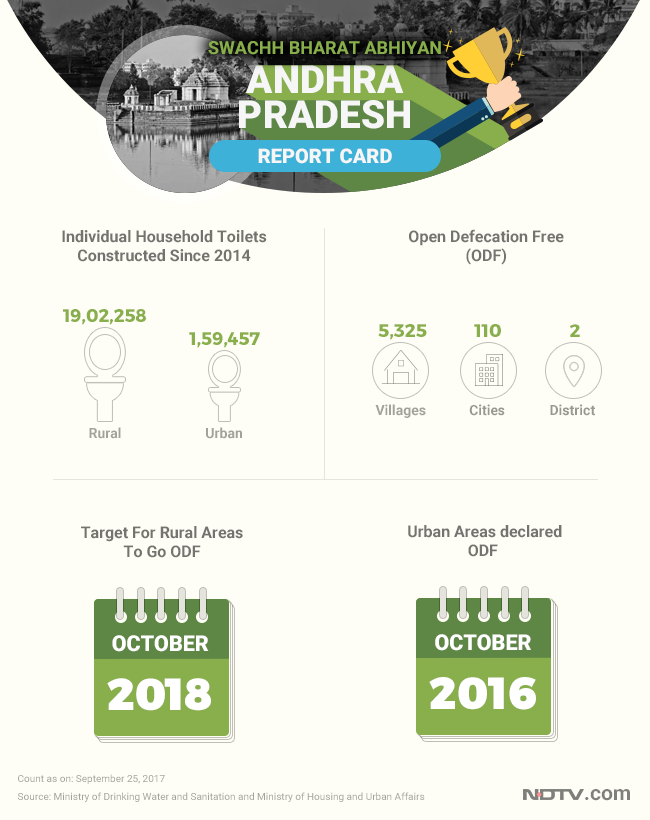 However, the rural areas have not matched the same success yet. While working at the ground level, the district officials observed that though toilets were a necessity for everyone, but due to a majority of the population becoming habituated to open defecation, the importance of toilets was not realised. So, it was decided that awareness campaigns should be conducted across the villages to first change the behaviour of the people towards defecating in the open. And to achieve this, the government made students and youth as torchbearers of the Swachh Bharat Abhiyan in the state and self-help groups were created to carry forward the community led sanitation programme.

These young swachh ambassadors then do door to door campaigns and talk to individuals about the ill effects of open defecation, while motivating them to build a toilet at home and keep using it throughout. These students were then rewarded with ‘Swachh Senani’ titles and grace marks in their studies, said D. Muralidhar Reddy.

Though the rural sanitation coverage of the state is lagging behind, making Andhra Pradesh stand among the nine states and union territories with sanitation coverage under 70 percent, still there are cases that stand out as an ideal example of how people’s involvement can make Swachh Bharat Abhiyan a success.

One such example is the Kappaldoddi village in Andhra Pradesh, where the sarpanch spearheaded the swachh mission, fought against all odds (like lack of funds, space to build toilets, people’s apathy) to make the village ODF in December 2016. Given the resistance that sarpanch faced from the villagers, who simply refused to build toilets, he decided to take two-pronged approach – spread awareness and create a situation forcing people to give up the age old practice of open defecation. To achieve this, the sarpanch held discussions with the district administration and decided to appoint two Swachhta Doots (cleanliness ambassadors) who would go to all the individual households without toilets and explain in detail the ill effects of open defecation and how the government would disburse money to those who built toilets.

As Swachhta doots and district officials conducted their routine awareness campaigns, the Sarpanch decided to stop cleaning the regular defecating areas around the village. After a few days, several villagers landed up at the Sarpanch office and demanded to know why the defecation spots were not being cleaned. The Sarpanch took this opportunity to address people on how important toilets were and how sanitation eventually leads to overall improvement of health.

Another example is the district of Vizianagaram, which despite its dismal sanitation scenario in February 2017, managed to rev up its sanitation condition by launching the “10,000 individual household toilets (IHHLs) in 100 hours” campaign in May 2017. Under this, a total of 10,000 toilets were built in 71 Gram Panchayats in just 100 hours, thanks to the efforts of over 3,000 officials and 2,000 labourers. The district administration is now looking forward to make Vizianagaram ODF by March 2018.

Across the state, aware of the gaps in rural areas, the Andhra Pradesh government has now escalated the work of constructing individual household toilets, and is planning to make the entire state ODF by March 2018.

70% Of Uttarakhand Is ODF, But Rest May Take Another Year. Here’s Why