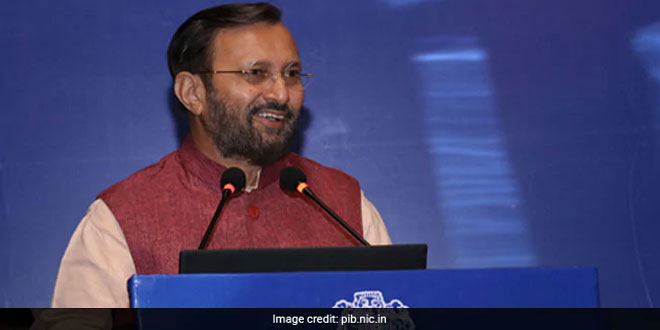 New Delhi: Air quality in Delhi-NCR has improved and the number of days with “bad” air quality has come down by 33 per cent, Union Environment Minister Prakash Javadekar said on Thursday. Speaking at an event to mark World Environment Day, which was on June 5, the minister said that the situation “is not as bad” as being portrayed in the media. He said, “Media reports are always creating a picture that lakhs of people are dying of air pollution but it is not as bad. Yes pollution is there but efforts are on.”

Also Read: From Planting Saplings To A Push For Recycing And Reusing, Here Is How Delhi Celebrated World Environment Day

Number of poor air quality days in Delhi in 2016 used to be 246, and in 2014 they used to be around 300, in 2017 it came down to 213 and now it has come down to 206. I am confident that when 2019 figures will come, the number of poor air quality days will further come down. This is a tremendous success. The days of poor quality air have reduced. It is a significant improvement.

He also said that the number of days with ‘moderate’ to ‘good’ air quality has increased from 108 in 2016 to 159 in 2018. “Moderate to good days have increased. 108 days of moderate air quality in 2016 have increased to 152 in 2017 and now they have gone up to 159 days. This progress in good air days are the result of concerted efforts of the last four years for the capital and NCR (National Capital Region),” he said, adding that air quality monitoring systems which record the air quality index (AQI) show improvement in air quality.

Just wearing masks won’t help. People have to actively participate and act responsibly towards the environment. We have to save water and electricity, take a cycle for a distance up to two kilometre, use public transport, maintain vehicles. All these activities will help reduce pollution. We will do better.

In his address, Minister of State for Environment Babul Supriyo urged people to use carpool at least once in a week to contribute to the cause of environment and “not be afraid of the alarming figures in the war against pollution”.

He said there was a lot that needs to be done for the environment and referred to his daughter’s WhatsApp group saying they had a lot of ideas to protect the environment. He said,

My daughter studies in Bombay and she has a WhatsApp group to which I was added and I am amazed to see the ideas they all come up with to protect the planet.

The event was attended by several senior officials of the ministry of environment, Central Pollution Control Board (CPCB) chairman S P S Parihar and officials from several state pollution control boards. During the event, MoUs (Memorandum of Understanding) were signed between IITs across the country and respective state pollution control boards for joint efforts in combating air pollution.

The ministry also released several publications, including Orchids of India by Botanical Survey of India which identified over 700 species of orchids in the country. Another book – Plant Discoveries – was released in which 438 plant species have been added to the Indian flora in 2018. Mr. Javadekar said,

‘Swachh Survekshan League 2020’ Launched, Cities And Towns To Be Ranked On Cleanliness Every Quarter

Most Consumers Will Pay More For Products That Can Be Reused And Recycled, Finds A Survey