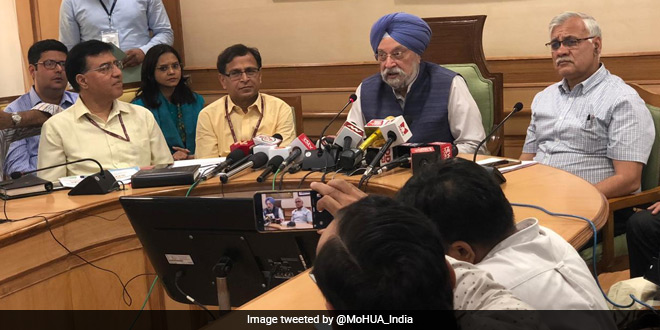 New Delhi: Minister of State for Housing and Urban Affairs, Hardeep Singh Puri launched ‘Swachh Survekhsan’ League 2020 today, which will be integrated with the fifth edition of ‘Swachh Survkeshan’ – the annual cleanliness survey to assess cities and towns of India on their cleanliness quotient. In a bid to sustain the onground performance and efforts of cities and ensure continuous monitoring of service level progress, the Ministry of Housing and Urban Affairs (MoHUA) has introduced Swachh Survekhsan (SS) league 2020.

As part of the SS league 2020, there will be a quarterly cleanliness assessment of cities and towns in India. The initial assessment will be conducted in three quarters – April to June, July to September and October to December. Each quarter will carry a weightage of 2000 marks.

In every quarter, cities and towns will be evaluated on the basis of monthly updation of Swachh Bharat Mission-Urban online dashboard or Management Information System (MIS) by cities along with citizen’s validation on the 12 service level progress (which includes collection and transportation of municipal solid waste, processing and disposal of municipal solid waste, IEC, among others) indicators through outbound calls. These two parameters will together determine the quarterly ranking of cities, said Durga Shanker Mishra, Secretary, MoHUA.

Talking about the need for a quarterly evaluation mechanism, Mr Puri said,

Every year, the Swachh Survekshan is redesigned innovatively, to ensure that the process becomes more and more robust, with focus on sustaining the changed behaviours. However, one concern that was commonly voiced was that cities cleaned themselves up just before a survey and slipped down after that. This year, therefore, we are launching the ‘Continuous Survekshan’ – the SS 2020 League, where cleanliness assessments will happen throughout the year – similar to the continuous assessments that are followed in schools and colleges – and feed into the larger annual survey in January 2020.

In SS league 2020, special focus has been given to parameters pertaining to reuse and treatment of waste water and fecal sludge management.

All About Swachh Survekshan

The process of ranking cities and town of India on the basis of cleanliness was first conducted in 2016, which covered 73 cities. The second and third round of the survey in 2017 and 2018 widened the coverage of the assessment to 434 cities with a population of one lakh and above and 4,203 cities respectively. The recently concluded fourth edition of the survey which was 100 per cent digital and paperless, was conducted across 4,237 towns and cities and 62 Cantonment Boards, impacting around 40 crore people.

In terms of access to sanitation facilities, more than 96% of our toilet construction targets (for Individual toilets as well as community/public toilets) already met, and we are well on track to achieve our sanitation targets, added Mr Puri.