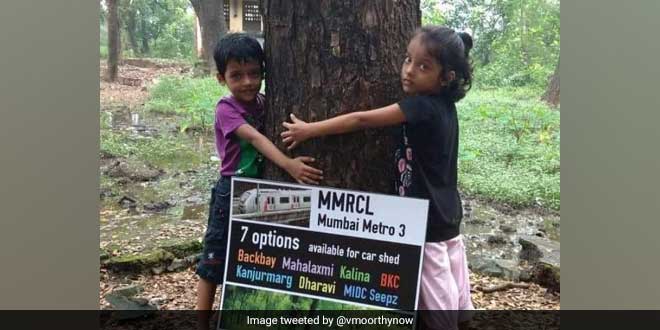 Mumbai: Giving a huge relief to the trees, tribals and citizens of Mumbai, the Bombay High Court on Thursday directed the Brihanmumbai Municipal Corporation (BMC) to refrain from cutting any trees in Mumbai’s last green patch, Aarey Milk Colony for now. The verdict came after thousands of Mumbaikars started protesting felling of 2,702 trees in Aarey to construct a Metro Shed. The HC came down heavily on the Mumbai Metro Rail Corporation Limited (MMRCL), Tree Authority and the BMC for not advertising the move effectively.

“Big win for #AareyForest in High Court. MMRCL claimed they had some permissions for the trees they cut so far (don’t believe them) but they have been ordered not to cut any more trees until the due process is followed. No tree cutting for now!”

Big win for #AareyForest in High Court. 1. MMRCL claimed they had some permissions for the trees they cut so far (don't believe them) but they have been ordered not to cut any more trees until the due process is followed.
No tree cutting for now!@rubenmasc @advocaterakesh9

The Court further slammed the Tree Authority for conducting a ‘farcical’ hearing with the people on October 10. It has directed the authority to consider all the objections raised by people and address them all by taking a public hearing again.

In a dramatic turn of events, the Mumbai Metro Rail Corporation Limited (MMRCL) had received the wrath of Bombay High Court and citizens in a public hearing at the Tree Authority office at Byculla in Mumbai on October 10. Hundreds of citizens had barged inside a small room with placards of messages to save the trees in Aarey Colony. While citizens raised concerns over tree felling, the High Court was angry after the MMRCL had failed to submit the affidavit justifying felling of over 2,702 trees for construction of a Metro Shed inside the colony. Giving an ultimatum to the authorities, the HC had said that it will put a blanket stay on tree cutting if the MMRCL doesn’t submit the documents in a day.

Citizens from all walks of life – politicians, students, housewives, activists, businessmen and residents of Aarey Colony have been protesting the construction of the metro shed, a parking place allotted for the metro trains, ever since the Brihanmumbai Municipal Corporation (BMC) issued a public notice on September 26.

The notice said that 2,702 trees will be removed, including cutting 2,238 trees and transplanting 464 trees. The notice had further mentioned that anyone is free to raise an objection and register it with the BMC till October 10. As mentioned in the notice, a public hearing was conducted by the BMC to hear the suggestions and oppositions by the people.

The BMC received nearly 40,000 objections in the form of emails and letter. BMC’s Superintendent of Gardens and Tree Officer, Jitendra Pardeshi, who was present at the hearing, said that the civic body will go through every complaint and suggestion and forward it to the MMRCL and seek their reply on them. Based on that, a report will be submitted to the Tree Authority. The Tree Authority is a 13-member team headed by the civic chief.

From infringement on Tribal rights to compromising on clean air, the citizens had raised several objections.

Over the last decade, hundreds of buildings have come up in the name of development and at the cost of trees. The city is already a victim of air pollution and every year the city’s air quality competes with Delhi. In such a scenario, uprooting trees from Aarey colony means cutting Mumbai’s lungs and thereby a compromise on oxygen. The authorities must realise that simply saying it will plant the equal number of trees isn’t feasible as they will take almost hundred years to be as effective as the current ones. We must stop this, says Aarti Parekh, one of the protestors present at the hearing.

The citizens had stated that the colony is a forest and only the Forest Department should have the right to decide on the green cover. The Tree Authority and BMC have no sanctions and if they do paperwork should be submitted in the HC.

The area has a green cover of more than four lakh trees and seven leopards along with thriving biodiversity of birds and insects. Aarey colony must be given a no-objection certificate under the Wildlife Act should to prevent encroachments on the green patches. In a similar situation in 2014, the matter was discussed and around 2,200 trees were to be cut by MMRCL. The government told them to bring down the number of trees to be cut but the MMRCL didn’t do so and instead increased the number by 500, said environmentalist Zoru Bathena.

Yash Marwah, who started an online petition ‘Let Mumbai Breathe’ seeking support from the citizens mentioned how two snakes were found dead after 200 trees were cut.

Last year, the BMC had proposed to cut around 400 trees and by end of 2017 they started the process. From November 2017 to August 2018, almost 200 trees have been cut which has resulted in death of two snakes. This is unfortunate. Besides, groundwater will be affected once the area gets concretised. It is only because of Aarey Colony that flooding is prevented in areas of Goregaon, Andheri and Jogeshwari.

Many had even said that despite having availability of seven alternative lands, the MMRCL is not considering them. NGOs, experts and activists suggested places like Mumbai Port Trust, Backbay Reclamation, Kanjurmarg, Bandra Kurla Complex and so on where the metro shed can be constructed without disturbing the green cover.

Tribals from 27 hamlets of the colony had also raised concerns saying their livelihoods will be at stake if the trees are cut. MMRCL recently evicted a family and destroyed their house along with fruit-bearing trees as part of the metro development project.

Though Aarey Colony has been marked as a green zone in the new Development Plan, 33 hectares of land has been exempted to build the car shed. The BMC had already started the process of removing trees from the site. However now with the latest order of the High Court, no trees will be harmed until further notice.