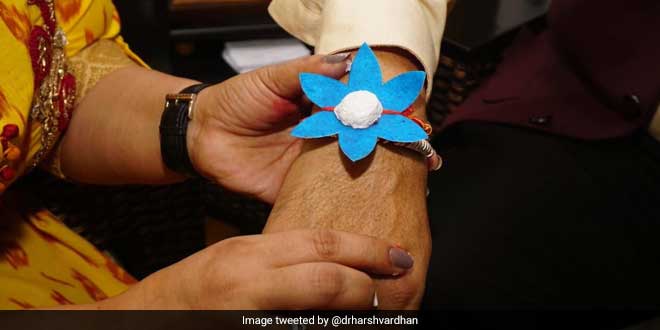 New Delhi: On July 26, celebrating the festival of Raksha Bandhan, Union Environment Minster Dr. Harsh Vardhan and his sister set a perfect example of the very popular phrase ‘Practice what you preach’. Dr. Harsh Vardhan’s sister Manoranjana Gupta tied him an eco-friendly plantable rakhi made using cloth and seed paper. As the name suggests, plantable rakhis turn into plants once sowed in soil. Proud of his ‘Green Good Deed’, Dr. Vardhan took it to social media, shared a couple of pictures of his rakhi and captioned it as, “This Tribes India’s #PlantableRakhi has a strong message to nurture a bond with environment while celebrating our revered festivals with dear ones. The seed paper rakhi is made by Tribal women and tied by my sister Manoranjana. Proud to say, this year I #PlantARakhi.”

This @tribesindia's #PlantableRakhi has a strong message to nurture a bond with #environment while celebrating our revered festivals with dear ones.The seed paper #Rakhi is made by #TribalWomen & tied by my sister @manoranjana. Proud to say, this year I #PlantARakhi#HappyRakhi pic.twitter.com/x4PoFZqeTw

Also Read: Ditch The Usual Gifts From Market And Upcycle To Go Green

Raksha Bhandan which literally means ‘bond of protection’ is about sisters tying a sacred thread on the wrist of their brothers. In return, brothers promise to protect their sisters for life. On the eve of the Raksha Bandhan, Dr. Harsh Vardhan appealed to people to take inspiration from the festival and do one ‘green good deed’ – celebrate green raksha bandhan by tying a rakhi to trees and take a pledge to protect them. Promoting the message, he said, “Celebrate a Green #RakshaBandhan this year – tie #Rakhis to trees and take a pledge to protect them. Protect our green brothers; protect the environment – a #GreenGoodDeed towards a #GreenSocialResponsibility.”

Celebrate a Green #RakshaBandhan this year – tie #Rakhis to trees & take a pledge to protect them. Protect our green brothers; protect the environment – a #GreenGoodDeed towards a #GreenSocialResponsibility. @moefcc pic.twitter.com/njxUap8iMJ

Dr Harsh Vardhan launched the Green Good Deeds Campaign in February 2018 with an the aim to bring about small behavioural changes in people’s day to day life, thereby making a significant impact on environment’s health. It is about understanding the ‘Green Social Responsibility’ and taking up one green deed everyday in order to protect our environment. To promote the campaign, the environment ministry has come up with a list of around 700 green good deeds that an individual can take up and help improve the environmental condition in India.

Small actions like planting a tree, carpooling, saving electricity, which help in the betterment of environment comes under green good deeds.

According to the minister, green good initiative has found acceptance by the global community. United Nations Environment Programme (UNEP) has formally accepted the green good deeds initiative, said the minister.

We have listed around 700 such small acts that do not need any extra effort or money. An app has also been launched to help people learn about these deeds and follow them.

Related Topics:
Tree Plantation
Up Next

National Green Tribunal Directs Central Pollution Control Board To Examine Over 50,000 Industries In Delhi Over Water And Air Pollution