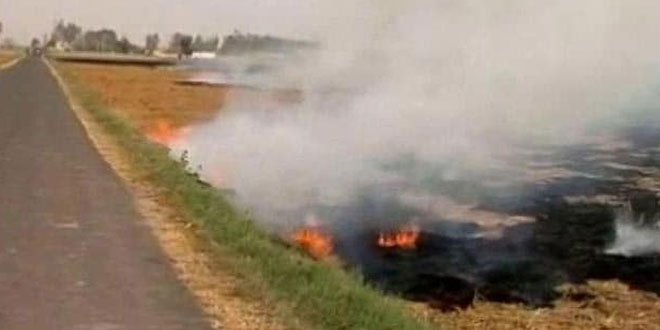 Chandigarh: To achieve the task of zero stubble burning, Punjab‘s agriculture department will provide more than 28,000 agro-machines/farm equipments to the state’s farmers with a subsidy component of Rs. 278 crore during the current fiscal year, an official said on Sunday. Subsidy ranging from 50 to 80 per cent is being provided to the farmers under the scheme for management of paddy residue, the official said.

While 80 per cent subsidy will be given to cooperative societies and farmers’ groups, individuals will get a subsidy of 50 per cent. The government is focussing on delivering state-of-the-art machines to farmers to manage the stubble and make Punjab a “zero stubble burning state”, Secretary Agriculture K S Pannu said.

He informed that the department has received around 12,000 applications from individual farmers and farmers’ groups and primary agriculture cooperative societies (PACS) till date for subsidised machinery.

He further said that under the first phase, around 15,000 machines are being subsidised at 50 per cent for individual farmers, another 13,000 agro-machines are being provided to around 2,200 farmer groups/PACS at a subsidy of 80 per cent.

Mr. Pannu said that in order to supply the requisite machinery to the farmers, the agriculture department has fully geared up to complete the task of distribution of these equipments before September 15.

The department had already initiated Information Education Communication (IEC) activities to educate farmers about the ill-effects of paddy straw burning, which not only causes environmental pollution but is also not good for the soil health.