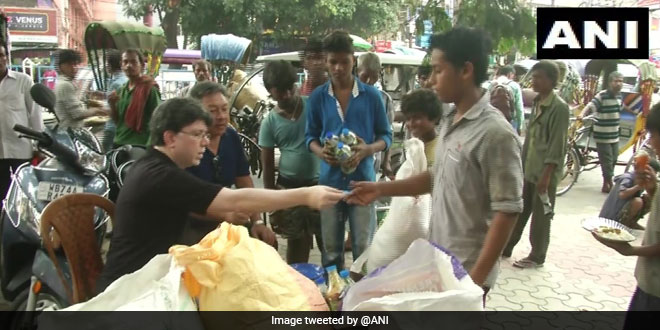 Siliguri: In a bid to make environment plastic free and create awareness regarding its disposal, alumni of a school here through a unique initiative have started distributing food free of cost to the people who deposit 500 grams of plastic waste. The endeavour is cutting ice through the poor people and commoners as rag-pickers with plastic bottles and other plastic waste stacked inside the gunny bags, can be seen queuing up at the food distribution centre. The initiative is of the alumni of Goethals Memorial School and Nishkam Khalsa Sewa. The collected plastic will be sent for recycling and other use.

As part of the initiative, first ‘food for plastic’ drive was organised in West Bengal‘s Siliguri on Saturday (August 11).

West Bengal: Alumni of Goethals Memorial School in association with Nishkam Khalsa Sewa organised a 'food for plastic' programme in Siliguri, yesterday. An alumni says,"We're giving food in exchange of 500gm of plastic, this is to create awareness in the city about plastic waste" pic.twitter.com/Bhiaw0x8si

“There is a tremendous response from the people. This will help in saving our environment as plastic is thrown here and there clog drains and are the cause of floods. Further, it is lethal for animals who consume it,” said SP Singh Saluja, President, Goethals Memorial School Alumni.

Social media and media can play a vital role in disseminating this information. We should not throw plastic here and there but rather should collect it and dispose of it properly. It can be deposited in a 2-litre bottle, he said.

Saurav Kumar Bhagat, who distributed food to the poor people who deposited plastic waste, said that food would be distributed every Saturday.

This is a very good initiative. Poor people can get food in exchange of just 500 grams of plastic, said Mr Bhagat.

The collected plastic will be sent for recycling and other use

Punjab Farmers To Get 28,000 Agro-Machines From The State Government To Tackle Stubble Burning