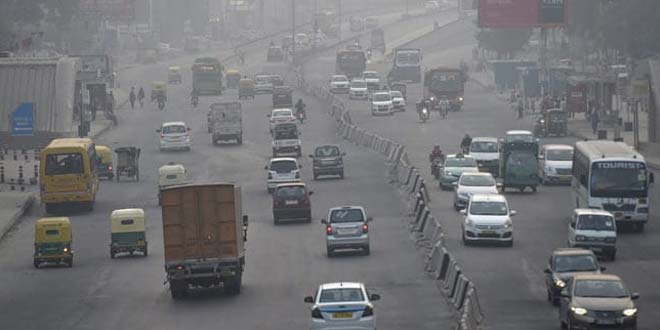 New Delhi: After being in the ‘poor’ category for two days, Delhi’s air quality has slipped back to the ‘very poor’ category on Friday due to the reduced wind speed and a dip in the temperature, says Central Pollution Control Board (CPCB) data. According to CPCB, Delhi had better air quality on Wednesday and Thursday due to increased wind speed which helped in cleansing the air. Authorities predict that there may be rainfall in the next couple of days which they said might lower the pollution level. According to the Central Pollution Control Board (CPCB) data, the overall air quality index (AQI)in Delhi at 4pm was 371, which falls in the ‘very poor’ category.

In the National Capital Region (NCR), Ghaziabad, Faridabad and Noida recorded ‘very poor’ air quality, while Gurgaon recorded ‘poor’ air quality, CPCB said. The overall PM2.5 level – fine particulate matter of toxic pollutant in the air with a diameter of less than 2.5 micrometers (several times thinner than a human hair) – in Delhi was recorded at 246 μg/m3, while the PM10 level was at 396 μg/m3. However, according to the World Health Organisation (WHO), the recommended limit of PM 2.5 is 25 μg/m3 24-hour mean and the limit for PM 10 is 50 μg/m3 24-hours mean.

The Centre-run System of Air Quality and Weather Forecasting (SAFAR) also said the air quality may improve in the next two days under the influence of light rains which is expected thereafter.

Meanwhile, the Centre has launched a National Clean Air Programme (NCAP) to curb the rising pollution levels in 102 cities in India, IIT-Delhi is working on a bi-weekly action plan to help authorities fight pollution in the national capital, especially during the cold weathers when air quality dips to abysmal levels. These bi-weekly plans will suggest pre-emptive measures to the CPCB to help it curb pollution caused due to the local factors.