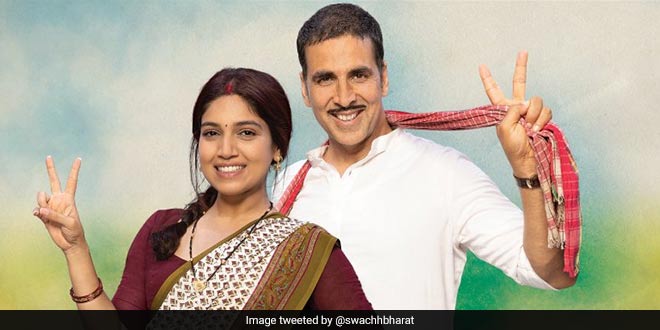 New Delhi: Playing the role of husband wife, ‘Toilet: Ek Prem Katha’ actors Akshay Kumar and Bhumi Pednekar pair up again, this time to tellthe benefits of having a twin pit toilet at home. In the video, the duo explains that when a twin pit toilet is used by a family of 6 members, it takes roughly 5 years for the pit to get filled up. The decomposed waste can then be used as manure for agriculture within a period of six months to a year.

The duo signs off by saying, “One should have a toilet which has twin pits.”

— Swachh Bharat I #AzadiKaAmritMahotsav (@swachhbharat) May 27, 2018

The campaign focused on promoting the twin pit toilet technology in rural India was launched at a Collectors Convention for Toilet Technology organised in the Delhi on May 27. Secretary, Ministry of Drinking Water and Sanitation, Parameswaran Iyer and ‘PadMan’ actor Akshay Kumar launched the campaign and released the 60 seconds video highlighting the benefits of twin pit toilet.

— Swachh Bharat I #AzadiKaAmritMahotsav (@swachhbharat) May 27, 2018

Appreciating the efforts of the actor Akshay Kumar at the launch event, Mr Iyer said, “Right from his movie, Toilet Ek Prem Katha, which was seen and appreciated by rural and urban people across the country, to his participation in the twin pit toilet campaign for the Swachh Bharat Mission, Shri Kumar has been a strong supporter of the sanitation movement underway in the country.”

Further, Mr Iyer took it to twitter to acknowledge the efforts of Toilet: Ek Prem Katha actors and other individuals who are helping India adopt safe sanitation practices.

Also Read: A Toilet Is A Necessity, It Is Everyone’s Birthright To Have One: Bhumi Pednekar, Actor of Toilet – Ek Prem Katha

“Launch of the twin pit toilet technology campaign with @akshaykumar (we are very grateful to Akshay and Bhumi) and young Collectors and officers from across the country. The right technology is what is moving us toward safe sanitation and a @swachhbharat”

Launch of the twin pit toilet #technology campaign with @akshaykumar (we are very grateful to Akshay and Bhumi) and young Collectors and officers from across the country. The right technology is what is moving us toward safe #sanitation and a @swachhbharat pic.twitter.com/1ybZnSslQY

Advocating twin pit toilet, Bhumi Pednekar took it to Instagram and said, “A two pit toilet is a simple and a sustainable solution. Together let’s take a step towards a healthier, safer and greener environment. Educate the people around you, spread the knowledge, and let’s make India open defecation free! @akshaykumar #SwachhBharat #TwinPitToilet #DarwazaBand”

At the launch, actor Akshay Kumar spoke about the need for influencers to talk freely about toilets, and empty toilet pits around the country to destigmatise cleaning of one’s own toilet by members of the family itself.

This is not the first time Akshay Kumar has done something like this. He has been quite vocal about cleanliness and Swachh Bharat Abhiyan. From raising awareness among people about toilets through ‘Toilet: Ek Prem Katha’ to initiating conversation about menstrual hygiene through ‘PadMan’, Padma Shri actor has been at the forefront of Swachh Bharat Abhiyan.

Dumping Garbage On The Streets In Trichy? Then Beware. The Civic Body Rolled Out A Spot Fine Vehicle For Violation Of Waste Management Rules