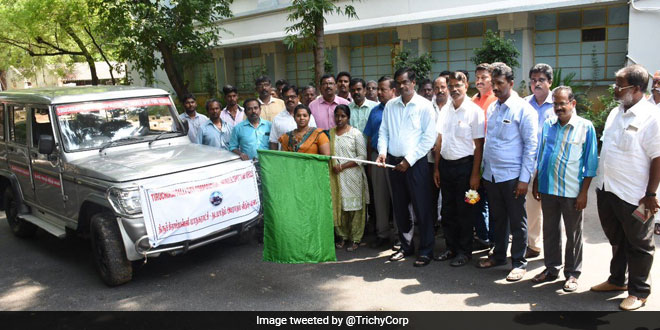 New Delhi: Have you been dumping garbage on streets or at public spaces and also not segregating your waste (into biodegradable and non-biodegradable) before handing it over to waste collectors? If yes, think again. In a bid to up the cleanliness quotient of the city, the Trichy Municipal Corporation has now launched an exclusive vehicle named ‘mobile spot fine vehicle’. It will also have a sanitation officer on board to impose penalties on defaulters who violate the Solid Waste Management Rules, 2016 – dumping garbage on roads or at vacant plots, littering on streets and not segregating waste at source. Notably, the civic body introduced an application-based smart spot fine collection system in the city in October 2017, with an objective to penalise people polluting the city.

Mobile spot fine vehicle launched in #trichycorporation for imposing fine on defaulters those who are not segregating of waste, dumping of waste on vacant plots @MoHUA_India pic.twitter.com/cnMJCWikZD

If a person throw or burn garbage in a public place, the city corporation would impose a fine on the culprit. The residents and owners of commercial establishments must comply by the Solid Waste Management Rules, 2016. What we have observed is… in some areas like Karumandapam, people take advantage of the darkness; they go out in the dark and dump their daily waste wherever they feel like. This should not happen, especially when we have door-to-door waste collection process in place. We have over 140 mini load carriers that covers over 80 percent of the city to collect waste from the homes, said one of the officials of the Trichy Municipal Corporation.

We have included this vehicle to keep a track on any swachhta related violations. The vehicle will help the swachh officials reach different locations to ensure that residents are unable to dump the garbage, neither during the day nor under the cover of darkness. And if they do, they will get caught to pay fine on the spot, added the official.

According to the civic body, the vehicle will inspect all four zones of the city, and the officer on board will have the authority to levy penalty for waste management violations ranging from Rs 5 to Rs 5,000. Notably, to improve the efficiency of spot fine system, the officer will be equipped with a hand-held device Mpol (Mobile Point of Sale) to collect 11 types of fine on the spot either by cash or via debit/credit cards.

Littering waste on the streets, roads or public spaces, dumping garbage in front of the commercial areas, urinating in the open, burning of waste, dumping biomedical waste are among the list of 11 types of fine.

When asked about what would be done in case the municipal corporation workers (waste collectors) are found violating the rules, the official said that even the municipal workers found handling the waste in an unsafe manner would be punished by this spot fine vehicle.

The Residents Welfare Associations (RWAs) were also roped in during the launch of the spot fine vehicle. They were informed about the purpose of the spot fine vehicle so that they can educate the households in their respective housing societies to support door-to-door collection of garbage, and to not litter the waste as it would attract fine. The aim of involving the RWAs was to garner their support in improving the system of door-to-door waste collection, and to keep the city clean.

‘This Is Not Human Waste, This Is Gold’, Says Actor Akshay Kumar Urging People To Build Twin Pit Toilet And Use Human Waste In Farming