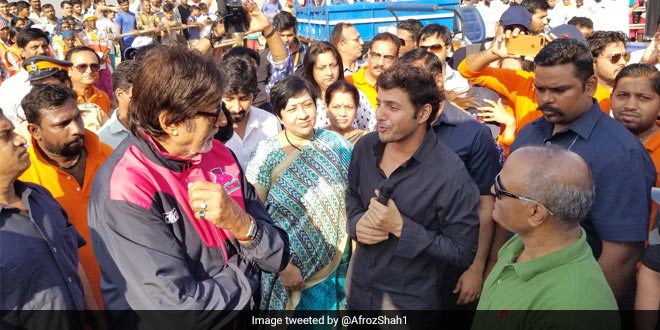 New Delhi: “Thank you, Afroz! No one ever told this man to do something about Versova Beach pollution. He saw that Mumbai’s favourite beach was drowning in its own waste; he simply started working to change this grim reality,” said Amitabh Bachchan as he gifted environmentalist Afroz Shah an excavator and a tractor for cleaning up Versova beach in Mumbai. These machines will ease the process of removing waste stuck inside the sands and will fasten the clean-up process. Explaining why he thought of gifting the machines to Afroz, Mr Bachchan added, “When I got to know about this man who was out there cleaning the Versova beach on his own, I was impressed. I wanted to go there and witness his work.”

I was simply shocked to see the amount and types of pollution at the beach and at the same time with this man, who was out there, removing all that filth with his own hands. It is not an easy task at all. That’s when I decided to support Afroz’s endeavor in whatever way I can.

Last month too, the legendary actor got personally involved in the Versova clean-up drive and helped the beach warriors in removing the litter.

On Thursday, again, the actor went to support the swachh crusader, Mr Bachchan shared a series of photographs from the beach on his twitter and said,

The joy of gifting for a cause as noble as the one I did today is the most satisfying experience of life! Gifted an excavator and a tractor for Versova Beach clean-up.

T 2755 – The joy of gifting for a cause as noble as the one I did today is the most satisfying experience of life .. !! Gifted an Excavator and a Tractor for Versova Beach clean up .. !! pic.twitter.com/j5DLLndE9s

Overjoyed with the gesture of Mr Bachchan gifting them equipment that they needed, Mr Shah thanked him and said,

Our dear Amitabh Bachchan gifted us a Jungli excavator and tractor by Escorts Group. Today the engines were fired by him. Love and love and love for holding our hands tight. Sir, you are a torch of light in this fight to beat pollution.

Today the engines were fired by him. Love and love and love for holding our hands tight. Sir , you are a torch of light in this fight to #BeatPollution . pic.twitter.com/0PKSG46Cvx

Versova beach clean-up is in its 115th week and since October 2015, Afroz and his volunteers have cleared more than 9 million kilograms of trash. The cleanliness drive has also been recognised by the United Nations and Prime Minister Narendra Modi. The UN conferred him with the title of ‘Champion of the Earth’.

Even the Ministry of Environment and Forests (MoEF) has decided to replicate Afroz Shah’s Versova Model for 13 other beaches across the country.