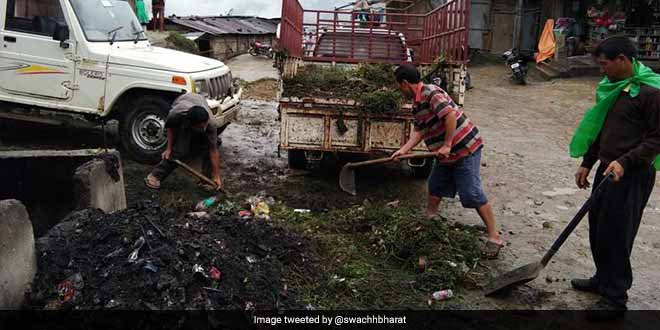 West Kameng, which already has healthy sanitation coverage of 92.40 per cent in its rural districts, saw more than 200 people participate in the town of Bomdila for a mass cleanliness drive. The cleanliness drive focussed on sweeping the roads and clearing some of the drains of the dirt which had accumulated. The event also saw the district administration interact with the residents and give them suggestions on waste segregation and avoid disposing of waste in drains to prevent these from clogging.

The district already has healthy sanitation coverage and will go open defecation free by December this year. But we also wanted people to understand that cleanliness should be an overall achievement and not just the ODF status. Such cleanliness drives will help get the message across to more people, said Sonal Swaroop, Deputy Commissioner, West Kameng District, Arunachal Pradesh.

An earnest start to the #FreedomFromOpenDefecation week in Arunachal Pradesh. Swachhta initiatives launched across the state with zest. pic.twitter.com/oqf8CwoxgS

District officials also spoke at length on the importance of all round cleanliness, be it keeping household surroundings or public spaces clean, or building household toilets under the Swachh Bharat Abhiyan. The officials also instructed households without toilets to complete their construction by mid- September so that the district administration gets ample time to follow the due process in order to get the district declared as ODF.

The Ministry of Drinking Water and Sanitation (MDWS) designated the week of August 9 to August 15 as the ‘Khule Mein Shauch Se Azaadi’ week. The ‘Freedom From Open Defecation’ week is to be celebrated across the country and will see the participation of 24 states, each with a concrete Swachhta Action Plan. Arunachal Pradesh has also chosen to be a participant in this celebration and saw several districts holding awareness camps on construction and maintenance of toilets. The districts of Subansiri, Siang and Dibang saw district administrations going to villages with low toilet coverage and explaining the villagers the process of constructing toilets and how they would receive financial assistance under the Swachh Bharat Mission. On August 12, a daylong inspection was held to assess the status of toilet construction across some of the districts by officials. They made a note of districts or villages which needed urgent sanitation assistance and these would be focussed on the coming few months to meet the goal of the state going ODF by December 2017.

Some districts and villages have done very well in terms of constructing toilets, but some are still lagging behind. We identified some such villages and have requested the community leaders, as well as respective district officials to ensure that construction of toilets begin immediately in such villages and districts, said Toko Jyoti, Chief Engineer (Sanitation), Department of Rural Development, Arunachal Pradesh.

In July 2017, Parameswaran Iyer, Secretary, MDWS had stated that Arunachal Pradesh could become the sixth Indian state to completely eradicate open defecation. The announcement came on the wake of the fact that 17 out of the state’s 20 districts have more than 80 per cent sanitation coverage. Apart from the Rs 12,000 provided under the Swachh Bharat Abhiyan, the state government has provided an additional amount of Rs 8,000 for construction of individual household latrines. By increasing the toilet construction amount significantly to Rs 20,000 per unit, the Arunachal Pradesh government has ensured that toilet construction did not become a financial burden for any of the state’s residents. With the state having overall sanitation coverage of 83.26 per cent, the administration is encouraging the community members to become more aware and participate in sanitation activities to celebrate the state’s complete freedom from open defecation.

#IndiaAt70: Sachin Tendulkar Urges The Nation To Set The Goal Of A ‘Swachh Bharat, Swasth Bharat’ On Independence Day