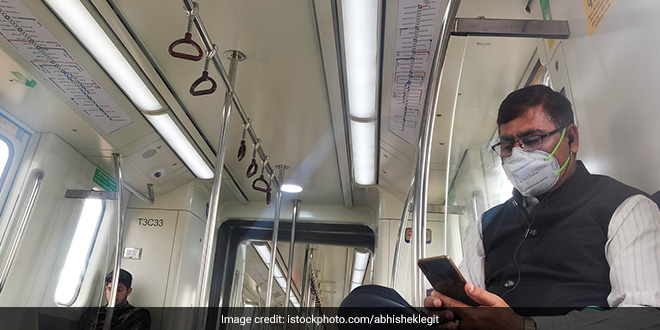 Fine of Rs 500 in Delhi for violating mask mandate

New Delhi: In view of spike in coronavirus cases in the city, the Delhi government on Wednesday (April 20) made wearing of mask mandatory in public places and imposed a fine of Rs. 500 on violators. Officials said the Delhi Disaster Management Authority (DDMA), in its meeting, also decided not to shut schools, but chose to come up with a separate Standard Operating Procedure in consultation with experts. The government is expected to issue an official order regarding the mandatory use of masks soon. Sources said authorities have been asked to keep a close watch on social gatherings and ramp up testing in the national capital.

They said Chief Minister Arvind Kejriwal is closely monitoring the situation and instructions have been issued to officials for taking steps to check the spread of the virus and preparations for treatment of Covid patients. In the DDMA meeting, emphasis was laid on vaccination of eligible groups as it will help keep in check the impact of the pandemic, officials said. Several participants asserted that there was no need to panic since the number of hospitalisations was low despite a rise in new Covid cases, they said. It was highlighted that the trends of hospitalisation needed to be closely monitored for the next fortnight as well as conducting genome sequencing of all positive samples put through RTPCR test.

It was also decided to raise the number of tests being done with the focus on people with symptoms, they said. According to official figures, there are 9,735 beds for Covid patients in Delhi hospitals and just 80 (0.82 per cent) of them are occupied. On Tuesday, Delhi recorded a nearly 26 per cent jump in fresh COVID-19 cases. The health department said 632 fresh cases were reported on Tuesday and the positivity rate was 4.42 per cent. The city had on Monday recorded 501 cases and zero death while the positivity rate stood at 7.72 per cent. The number of daily COVID-19 cases in Delhi had touched the record high of 28,867 on January 13 this year during the third wave of the pandemic. The city had recorded a positivity rate of 30.6 per cent on January 14, the highest during the third wave of the pandemic which was largely driven by the highly transmissible Omicron variant of coronavirus.

Fresh Rise In COVID-19 Cases, Wave Or A Ripple?