New Delhi: Gurguda village in Madhya Pradesh’s Rewa district is home to 500 people belonging to Kevat (boatman) and Gadariya (shepherd) communities. Surrounded by the dense forest and mountains on the three sides, Gurguda village has three to four homes situated on each hill, which means it is a mammoth task to commute within the village. Despite the hilly and rocky terrain, 45-year-old Ranjana Dwivedi makes a trip to the village every day to provide her services as an ASHA (Accredited Social Health Activist) worker.

Ms Dwivedi started working as an ASHA didi in 2010 when she saw many children dying of vaccine-preventable diseases like Polio, and other health challenges including malnutrition and Jaundice. Recalling the state of healthcare in Gurguda in 2010, Ms Dwivedi said,

Firstly, healthcare services would never reach to this remote part of India. Secondly, back then, people were afraid of taking vaccines because of the common and natural side effects like fever. I couldn’t see children dying just like that and decided to act upon it.

Also Read: Health Of Mothers And Children Is The Priority For This 28-year-old ASHA Worker In A Jharkhand Village

Ms Dwivedi who holds a bachelor’s and a post-graduate diploma degree was firm on educating fellow villagers, who according to her are mostly illiterate. Wearing a purple saree, her uniform as an ASHA worker, Ms Dwivedi started going around the village, in an attempt to sensitise people but clearly, it was not a cakewalk. She said,

Getting to Gurguda village is an uphill task. One can travel either via river or through woods. The forested route is shorter but risky because of the wild animals and dacoits. Therefore, I take the boat.

Ms Dwivedi covers the 20km distance in parts – the first 10kms by auto, 2kms on foot, followed by a boat ride and another 4km on foot. She has fallen off the boat twice during her travel but that did not deter her spirit.

Because of the tough terrain, one can visit only one hill in a day. You cannot cover the whole village, she said. 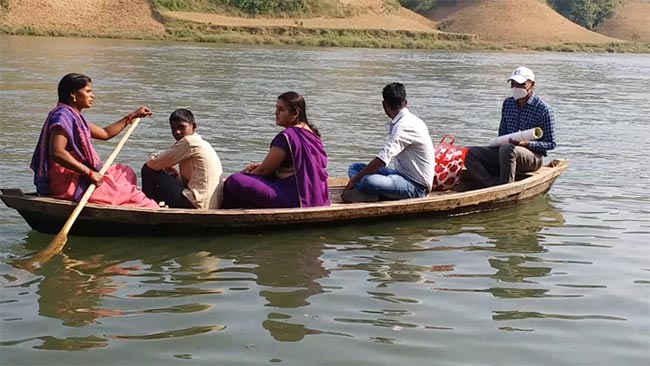 Also Read: Independence Day Special: Meet Odisha’s ASHA Worker, Who Made It To Forbes List For Improving Health System In Her Village

Another hurdle was to make people talk and listen to her. Women in the village would run away upon seeing the ASHA worker. Sometimes children would lie and say that their parents have gone to get wood. This went on for almost two years. However, today, women take a day off from work and bring their children for routine immunisation. They also contact Ms Dwivedi, their ASHA didi, every time they require healthcare assistance. Explaining how the change happened on the ground, Ms Dwivedi said,

I didn’t stop visiting villagers despite facing multiple rejections or doors being slammed on my face. Secondly, instead of preaching to people about a particular topic, I first befriended them. I would sit and talk to them about their life, house, and personal problems so that they would become comfortable with me. Thirdly, I resorted to hand paintings. 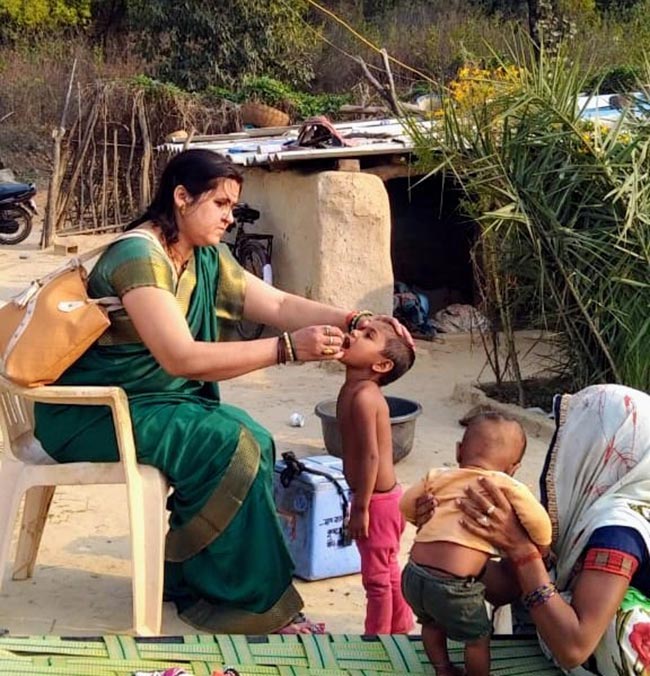 Ms Dwivedi took the help of her younger son who is now 23-year-old in painting village scenes. For instance, for a poster on Dengue, she created a fictional character Manmoji Kaka (uncle) who would get wood from the village and make a living. While going about his day, Manmoji Kaka would make way for dengue mosquitoes to penetrate.

The poster shows Manmoji Kaka letting water accumulate in a vessel for weeks; working without wearing full clothes; considering dengue fever as a regular fever and opting for self-medication; not using a mosquito net. Such hand-painted posters had a huge impact on the villagers and aided change at a community level, explained Ms Dwivedi.

It was going all well until the COVID-19 pandemic hit the country and Ms Dwivedi faced another challenge of making people believe that the Novel Coronavirus is contagious and one should not be sloppy. At the same time, many people were returning from cities to the village. With the help of her husband, Ms Dwivedi went to work and ensured everyone who enters the village undergoes isolation and follows all COVID protocols. She went door-to-door to educate people about COVID precautions including hand washing with soap, social distancing and masking.

Not a single COVID-19 case was reported from our village. While I was there to protect others, I had to ensure my safety also and for that, I would carry a hand sanitiser. After returning from work, I would take a shower and maintain distance from my children, said Ms Dwivedi.

Once again, her son made posters explaining the repercussions of not following COVID protocols. One of the posters narrated the story of Ravi, an imaginative character, who caught the virus because he went out in the public without a face mask. Ms Dwivedi also ensured 100 per COVID vaccination in her village. 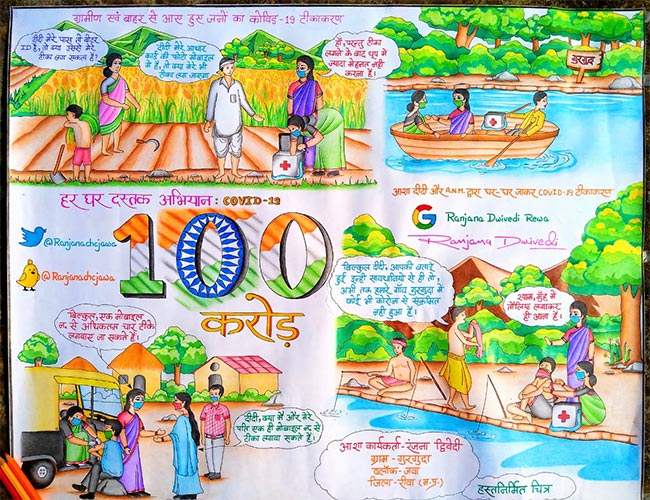 Also Read: ‘Knowledge Is Power’, With This Belief, 44-Year-Old ASHA Worker Is Educating People On Health In Bengaluru

When asked what kept her going, Ms Dwivedi said,

N K Pandey, Block Medical Officer told us that being from the health department, we can’t shy away from doing our job. Though I was scared of contracting the virus, I never showed this fear to villagers. Every night, after coming back home, I would feel proud of myself and my work.

The National Public Radio, an international organisation based in the United States, has recognised Ms Dwivedi’s work. She has been featured as one of the three women healthcare heroes from around the world who played a key role in the global effort to control the COVID-19 pandemic. The international recognition came as a motivation for Ms Dwivedi, a community health worker.

ASHA (which means hope in Hindi) is an acronym for Accredited Social Health Activist. ASHAs are the grassroot health workers assisting the Ministry of Health and Family Welfare (MoHFW) in delivering primary healthcare, particularly for women and children, in both rural and urban areas since 2005. There are over 10 lakh ASHA workers in the country. In May 2022, the World Health Organisation’s Director-General Dr Tedros Adhanom Ghebreyesus honoured ASHA workers for their crucial role in linking the community with the health system, to ensure those living in rural poverty can access primary health care services, as shown throughout the COVID-19 pandemic. India’s ASHAs are among the six recipients of the WHO Director-General’s Global Health Leaders Award. The award ceremony was part of the live-streamed high-level opening session of the 75th World Health Assembly.