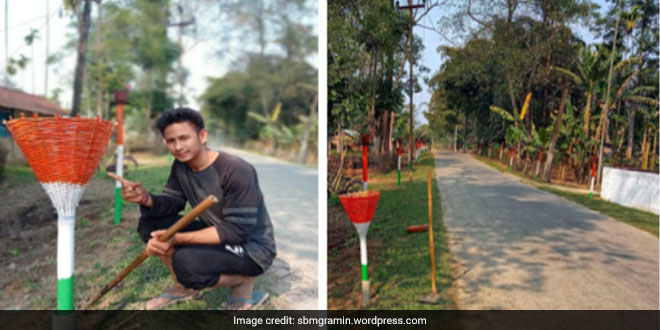 New Delhi: 13 months after the Prime Minister Narendra Modi launched the Swachh Bharat Abhiyan in October 2014, the gram panchayat (GP) Ophulia of Assam’s Dibrugarh district earned the coveted tag of being an open defecation free GP. This was no mean achievement, given that Dibrugarh district still has not become open defecation free (ODF) – as of now, it has sanitation coverage of 82 percent post the construction of 96,054 toilets in 93 GPS and 1324 villages. But Ophulia’s pursuit of swachhta didn’t end with earning an ODF tag. The gram panchayat has been working tirelessly towards the sustainability of its ODF status.

Also Read: Seeing Her Village Suffer From Diarrhoea On Regular Basis, This Warrior From Assam Started Her Swachh Crusade

To sustain the ODF status, the entire community actively participated in various activities. This became possible post the implementation of Community Led Sanitation (CLTS) approach, which ensured that all members of a village community, irrespective of their age and gender contributed towards the sanitation campaign.

The triggering exercises were performed under the CLTS approach, such as providing basic information on health and hygiene, telling people about the physical, mental and social improvements which could be achieved when a village becomes ODF.

The enthusiasm among the local population only kept increasing and the district administration encouraged them at each step. From organising pride rallies with local participation to street plays, the administration ensured that the interest of the people towards following safe sanitation practices was sustained, said one of the district officials.

People from the entire gram panchayat now contribute towards beautifying the village roads by planting flowering plants and trees. In addition to this, a number of garbage bins have been installed at various strategic locations in an effort to ensure that people don’t litter around.

Not restricted to just beautification, the gram panchayat, which hosts more than 400 families, also boasts a plastic free environment and household level composting. “Every resident of this gram panchayat, be it school going children or elderly, is aware of the need to limit the use of plastic bags and they also believe in transforming waste into wealth through composting,” said the official.

There are swachhta parks in the gram panchayat, which are equipped with composting pits for bio-degradable waste to be composted, artificial ponds for water supply and adequate space for growing plants and vegetables.

In terms of waste management, there are sanitation workers that segregate the waste collected on a day to day basis. “The bio-degradable waste, comprising food waste and leaves is sent to the composting pits where the waste is turned into compost. While the non-bio-degradable waste, such as plastic, glass bottles, leather and paper is sent for recycling,” the official added.

Ophulia gram panchayat’s work towards ODF sustainability through community led sanitation approach is a perfect example of how collaborative efforts of the administration and the local population can work successfully. The gram panchayat now serves as a good example for Dibrugarh and other districts, towns and cities of Assam to follow.