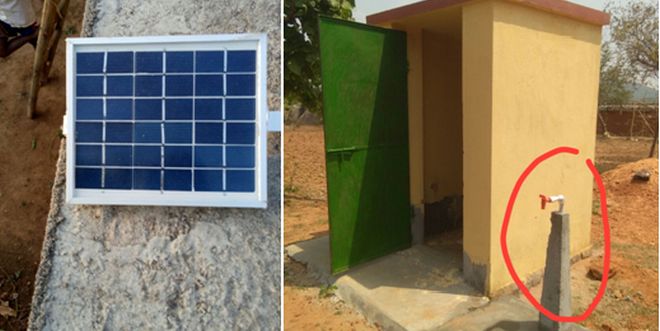 New Delhi: With sanitation coverage of 73 percent, Jharkhand’s Ranchi is not only working on a mission mode to become an open defecation free (ODF) district by October 2018 but is also taking crucial steps towards unimpeded toilet usage. The state capital, which has come a long way from its dismal sanitation status of 17.72 percent in 2014,  is now installing solar-powered lights in toilets in an effort to motivate beneficiaries towards sustained usage of toilets. The district administration is installing solar lights to ensure that people should be able to toilets at night, at times when electricity is not there.

According to the district officials who are working on a war-footing to make Ranchi ODF by October 2018, some people in remote areas who got toilets at home still defecate in the open due to non-availability of light inside their toilets – this is due to irregular electricity supply.

People living in remote areas have this habit of waking up early well before the sunrise and at times when they find no light in their toilets due to erratic electricity supply, they opt for defecating in the open under the moonlight. This was defeating our purpose of constructing toilets at the first place, forget its sustainable usage. To fix this, the district administration came up with an idea of installing solar-powered lights to ensure that toilet beneficiaries have light supply round the clock to use toilets with any difficulty. The solar lights are very easy to install and would work without any issue for three years, said one of the district officials.

As per the district officials, the beneficiaries are happy with this initiative as they are now able to use their toilets even at night.

Talking about the behavioural change among people in respect to adopting safe sanitation practices (stop open defecation and use toilets), the official said that sanitation was not a big priority in the villages prior to the launch.

People were used to the age-old practice of defecating in the open… this was the reason behind the district’s dismal sanitation coverage of just 17 percent before the launch of Swachh Bharat Abhiyan in 2014. The idea was to not just provide toilet facilities but to ensure behavioural change among people so they not just keep using the toilets but also maintains it well, added the official.

This non-availability of electricity in remote areas, resulting in no light to use toilets at night or early in the morning, led to decline in the usage of toilets. However, this novel initiative of installing solar-powered lights led to an increase usage of toilets among people, said Mahimapat Ray, District Collector, Ranchi.

The solar LEDs are being provided through Village Water and Sanitation Committee (VWSC) that works to improve the water supply and sanitation conditions in villages, and panchayats funds.

So far, over 125 households (households or toilets?) in the district have been provided with solar-powered lights so far. Each LED light costs Rs. 300, and the government is planning to increase the coverage through Corporate Social Responsibility (CSR) provision from electric companies.

However, installing solar-powered light is not the only way through which the district administration is ensuring that people don’t revert back to their usual habit of defecating in the open. To sustain the practices of healthy sanitation and to keep the Swachh Bharat mission up and running in the district, the officials are also utilising the Community Led Sanitation (CLTS) approach. That is to involve all members of a village community, irrespective of their age and gender contributed towards the sanitation campaign. The triggering exercises are being performed under the CLTS approach, such as providing basic information on health and hygiene, telling people about the physical, mental and social improvements which could be achieved when a village becomes ODF.

The district administration is hopeful that by October 2018, they will not only be able to provide individual household toilets to all but will also successfully inculcate the necessary behavioural change among people.