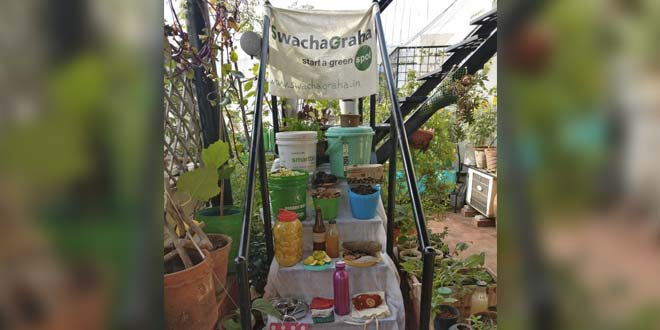 New Delhi: Every year during Navratri, the South Indian states of Tamil Nadu, Karnataka, Kerala, Andhra Pradesh and Telangana celebrate Dasara Golu by arranging dolls and figurines, on odd number of steps, depicting a story or a scene. On the tenth day that is Dussehra, the golus are made to sleep and the very next day they are safely packed in boxes for next year’s Navratri. Keeping up with the festive spirit, 57-year-old Vani Murthy from Bengaluru, decided to celebrate the festival but with a swachh message. Giving an eco-friendly touch to the auspicious occassion, Ms. Murthy replaced dolls with messages of composting, plastic pollution and other eco-friendly things.

Many people don’t even know about their actions which are harmful to the nature. My Dasara Golu was dedicated to sustainable practices which will leave a positive impact on the environment like replacing single-use plastic cutlery with either steel or ceramic or glass cutlery, says Vani Murthy, a homemaker and a member at Solid Waste Management Round Table group in Bengaluru, while speaking to NDTV.

Ms. Murthy who has switched to green practices and lives an eco-friendly life kept a seven step Dasara Golu for a day, on the steps of her terrace. Like golu (dolls) depict a story, Ms. Murthy’s golu (green steps) depicted seven steps to SwachaGraha.

Another step had natural cleaners Ms. Murthy makes at home. Right from shampoo, body soap, floor cleaner, dish cleaner, to cloth cleaner, all can be made at home. The reason behind this is, chemicals present in all kinds of cleaners are not only harmful for us, but for the environment as well and Bellandur lake which is dying a slow death is a testimony of it.

Ms. Murthy who has been practising composting at home from past 10 years also recommended composting as a way to manage waste and produce manure at home on the last step.

Kitchen waste is a good resource and can be used to do composting which can then be used to grow your own food. This way, you will not only help environment live a healthy life, but yourself too, says Ms. Murthy.

In her personal life, Ms. Murthy does not celebrate the festival of Dasara with great pomp and show, but this year she thought of using it as a way to educate people, to tell people about the changes they can make in their daily life for a healthy and green environment. Talking about the same, Ms. Murthy says,

Even if I don’t go to a temple regularly or don’t celebrate festivals, I know daily I am doing something to honour this planet and worship the environment that gives us air, water and soil to grow our food.

As member of the Solid Waste Management Round Table (SWMRT), Ms Murthy promotes waste segregation at source through a campaign ‘2 bin 1 bag’. The campaign 2 bins 1 bag includes using red bin for wet waste, green bin for kitchen leftover and one bag for recyclables. Ms. Murthy who has always championed the cause of composting takes workshops in schools, colleges, corporate, apartments and other places. 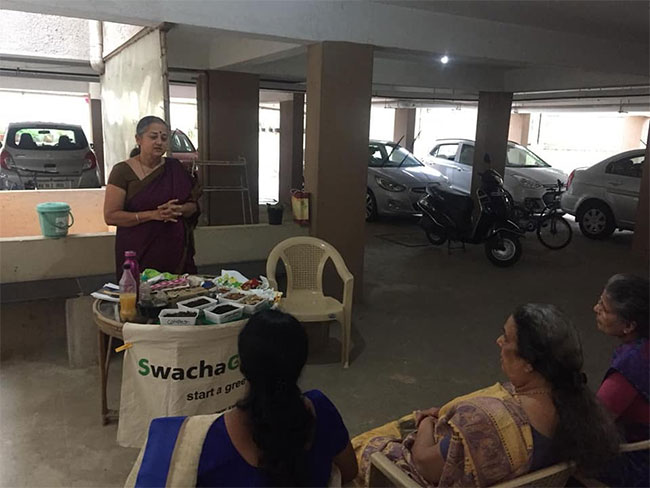 I talk about composting as an addiction and that is why I am known as the composting queen. I have a trolley in which I take my stuff and show people how easy composting is. Also, I want people to feel pride in refusing single use plastic and carrying their own cutlery even at public gatherings, says Ms Murthy.

With all the green initiatives, today 90 per cent of who Ms. Murthy is in contrast to what she used to be years back.

Stubble Burning: A Bale Of Paddy Straw- Convert It Into Biofuel, Don’t Burn It, A Punjab Startup Shows The Way