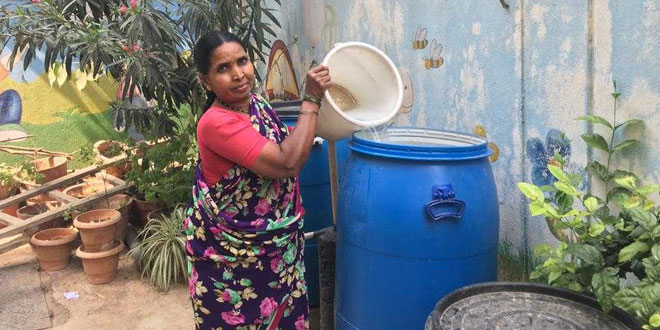 New Delhi: Once popularly referred to as the city of lakes – Bengaluru hosting over 300 lakes in the 1970s, today, the lakes are dying a slow death, the reason being pollution that leads to the formation of toxic froth in lakes like Bellandur and Varthur. Rapid urbanisation, the encroachment of lakes, and disposal of sewage flow from factories into lakes has led to stressed out water resources in the city and made water unfit for usage. While Bangaloreans struggle for something as basic as water and end up paying a hefty amount to tankers for clean water, the residents of Maa Brindavan, an apartment complex in Whitefield, are saving 500 litres of water every day.

Talking to NDTV, Adhinarayana Rao Velpula, water crusader and one of the residents of Maa Brindavan, says,

In our apartment complex, there are 46 flats and through borewell, we get 500 litres of water daily which is obviously insufficient for all the residents. Hence, we like other Bangaloreans would rely on water tankers that charge us Rs. 600 for 3,500 litres of water. The cost of water tanks is sky rocketing because of the demand and supply gap.

Concerned with high water bills and water crisis in the city, on March 23, Adhinarayana, posted a suggestion on his apartment’s WhatsApp group that asked residents to not wash their cars in the month of April and May to save water. Because one car wash requires minimum of 10 litres of water. The idea received both bouquets and brickbats.

While some simply rejected the proposal, others agreed to wash their cars on alternate days, but to me 10 litres of water being used just for cleaning was huge. Together we brainstormed and one of the residents, Manju, suggested to collect rejected RO water and use it for non-drinking purposes, says Adhinarayana.

It is Nandhu, a resident, who suggested installing a drum in the parking area and further sharing pictures of residents contributing waste water to motivate others to follow the same suit, recalls Adhinarayana.

Slowly and gradually, the idea caught on with the residents and today 20 out of 26 flats that use RO, contribute their wastewater for society’s daily water requirement. Following this practice, together, the residents now manage to save 500 litres of water every day. The rejected RO water collected in the society is now being utilised for the purpose of cleaning vehicles, washing parking lot, and watering garden and plants in society.

Earlier the number of water tankers purchased by our association would be in double digits, but today, we purchase only two tankers, says Adhinarayana.

To further reduce the consumption of fresh water, the residents association has switched to water saving aerator or adapter, a water saving device that simply fits onto a tap and reduces the flow rate of water. In all the wash basins, foam flow aerator that gives 6 litres of water per minute has been replaced with rain flow aerators. The aerator has brought down the flow to 3 litres per minute without any compromise on washing experience. This way, 50 per cent of the water is saved.

We are looking for other ways to conserve even more water and manage waste water. But today, when the city is facing severe water crisis, being able to save even 500 litres of water, is a big thing and we hope other individuals will learn a lesson, signs off Adhinarayana.

Rejected water from RO being utilised for the purpose of cleaning vehicles, washing parking lot, and watering garden and plants in society

IPL 2019: In Bengaluru, Flags Get A New Lease Of Life, Get Upcycled Into Bags, Street Vendors Get It For Free