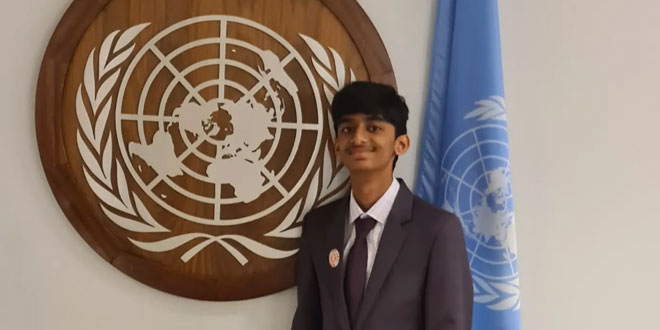 New Delhi: The issue of ‘perfectionism’ has been prevalent among adolescents and is harmful in terms of its association with mental health problems, a study published in the National Centre for Biotechnology Information (NCBI) has stated. The study associated perfectionism with an increased risk of sadness and a decreased sense of self-worth among adolescents.

Several youngsters have fallen victims to this, but 15-year-old Aniketh Kalagara from Bengaluru has initiated a step towards mitigating the issue among the youth through his project ‘Ridere’.

Ridere works towards raising awareness among young children and their parents about the issue of ‘pressure of perfection’ among youth aged 10 to 18. The project is driven by his personal experiences.

At the age of seven, when I used to live in the United States, I was bullied by many people for my physical appearance – my height and my weight were constantly looked down upon. Even as a teenager, I faced constant pressure and a need to be perfect. This pressure has led me to want to start this project, as I know that there are many teenagers around me and many of my friends have this pressure to be perfect, both physically and academically.

Through Ridere, Mr. Kalagara conducts multiple mental health workshops and sessions for the youth under the guidance of medical experts and educators. As a part of the project, Mr. Kalagara also educates families of youth about the importance of a parent-child relationship, as he believes a parent-child bond lays the foundation for a child’s personality, life choices, and overall behaviour.

At present, he is actively working with a psychiatrist based in England, Dr. Raja Kumar, and CEO of StayQrious, Anand Srinivas, who have helped him through the course of this project.

Dr. Raja is my source of inspiration in leading the project. He has also guided me as to what impact the project should have among the teenagers. He wishes to reach out to as many people as possible.

The 15-year-old had recently hosted a cricket event, ‘Aspire’, with the idea of using the sport as a medium to bring different kinds of people under one roof and spread awareness about mental health and increase the reach of the project. For the event, he successfully raised Rs. 1 lakh and arranged sponsors.

Ridere has impacted more than 400 families and also educated them about parent and child relationships. Most of the families got familiar with the project after participating in several events like ‘Aspire’ hosted by Mr. Kalagara.

Many people got to know about the project through social media as well. So, this shows the impact of the project – the fact that people can go back home and talk to each other about their mental health. I’ve had students tell me that after attending the workshop or sessions, they were able to open up to their mother or father. That is the effect I really need and look forward to in the future, whether it is just one person or 10, Mr. Kalagara said.

Mr. Kalagara enrolled with the Bengaluru-based organisation 1M1B’s (1 Million for 1 Billion) Future Leaders programme, from which his project received acknowledgement.

1M1B engages and enables youth to become future ready problem solvers creating real world impact. Established in 2014, 1M1B is a United Nations accredited non-profit with special consultative status to the UN Economic and Social Council (ECOSOC) and is associated with the UN Department of Global Communications.

Through the 1M1B’s Future Leaders programme, he participated in a 3-day immersion in New York and had the opportunity to showcase his impact at the annual 1M1B Activate Impact Summit at the United Nations Headquarters.