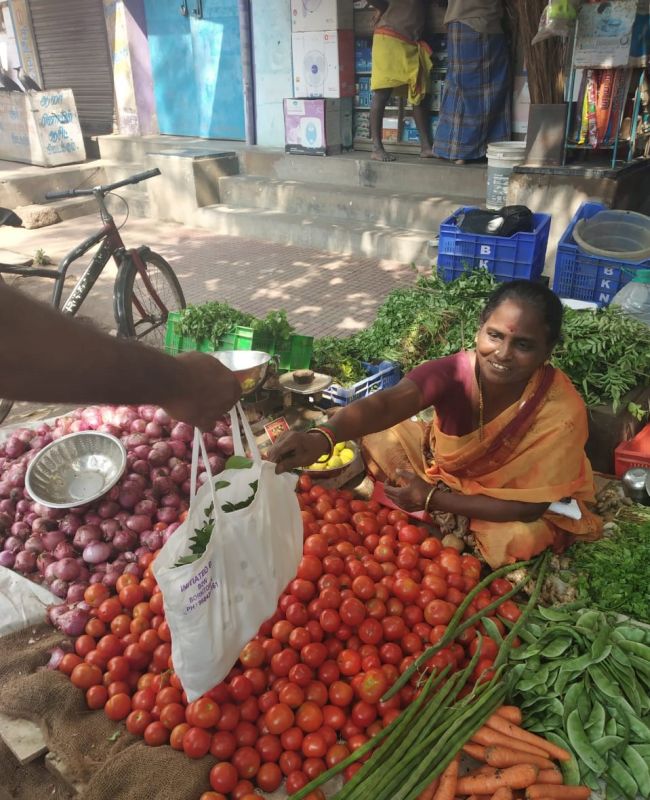 New Delhi: Noida Authority takes a crucial step to cut down the city’s plastic consumption by distributing cotton cloth bags and make public aware about the ill-effects of using a plastic polythene bag. The campaign kickstarted on July 4, and it is the first time Noida authority has taken a step towards getting rid of plastic bags, despite the state government enforcing a ban on plastic across all cities of Uttar Pradesh on July 15 last year. Talking about the campaign to beat plastic bags menace in the city, Alok Tandon, authority CEO said, “We want to make Noida ‘break free from plastic bags’ with our ultimate goal to make Noida a plastic-free city.”

Further explaining the details about the campaign, Mr Tandon added,

The drive initially saw the distribution of more than 500 cloth bags in Harola market in Sector 4 and within few days the entire stretch of Noida will be covered. With this, we want to enforce the plastic ban that came in the state in the year 2018, effectively. We will be educating people on why they need to give up their toxic relationship with plastic bags and adopt the greener alternatives.

Mr Tandon also said that the main purpose of the drive is to make it a people’s initiative wherein the public will be encouraged to switch over to cloth bags and completely do away with plastic bags when they go to markets for purchasing groceries. “This will reduce the plastic waste generation in the city that ends up taking the toll on our already overfilled landfills,” added Mr Tandon.

Currently, the authority is frequently carrying out anti-plastic inspections, penalising offenders and confiscating polythene bags. As per the ban, there is a provision of a penalty of Rs 5,000 for using a plastic carry bag of 40 microns and below thickness. Stricter fines will be levied on repeat offenders, officials said, adding that businesses can also be banned from carrying out commercial activities.

This year the Noida Authority has made ‘beat plastic pollution’ its agenda since World Environment Day on June 5. During that time, Noida Authority undertook an initiative of providing cow-dung plant pots in bid to avoid plastic and its packaging.

What People Have To Say About Giving Up Plastic Bags

Speaking to NDTV, a resident of Noida, Lakshmi Kapur said,

Even if I don’t use plastic bags on my own when I go and buy veggies at my local market, I always come back with 5 to 10 polybags. I think the Noida Authority should focus on providing alternatives to the vendors than the general public.

On the other hand, 32-year-old Arnav Sharma, a resident of sector 37 Noida adds,

Be it the superstores or our nearby local market, everyone is using plastic bags. They are cheaper and are available easily. If plastic ban needs to be implemented effectively, first of all, plastic bags manufacturing units should be stopped completely, and then authorities should look out for options and try and provide greener alternatives to the public.

Traders too are skeptical about the new initiative, saying such drives are being carried out in the city from last few years, but none of them have been successful, the need of the hour is to stop it at manufacturing level itself.

Sushil Jain, President of Noida’s Sector 18 Market Association adds, “There is a need to check plastic and polythene at the manufacturing level itself. It is strange that you are selling milk and other grocery items in plastic packets, but penalising a vegetable vendor.”

Rahul Gupta, President of Traders’ Association of Savitri Market hailed the move as a positive step but said the need is also to raise awareness among the public.

If something like this is happening, it is no doubt a good move. But we must understand that it is easier for shopkeepers and well off customers to use paper or cloth bags for shopping. Streetside vendors use plastic because it is cheaper and easily available, authorities should come up with solutions where greener alternatives are as cheaper as a plastic bag, he added.

Attention Freshers! Plant 10 Trees If You Are Part Of These 9 Colleges In Delhi