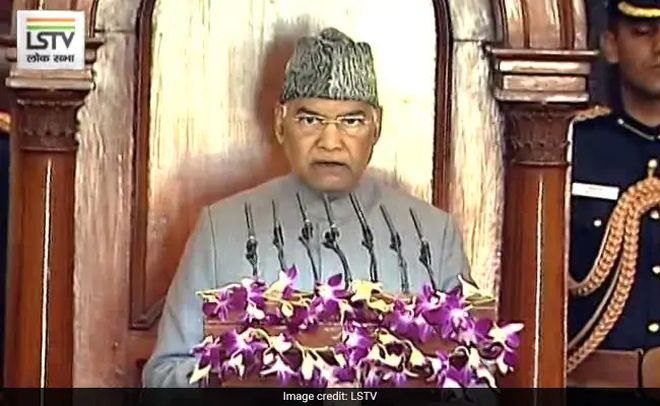 New Delhi: The Budget Session of Parliament began on January 31 with an address by President Ram Nath Kovind to the joint sitting of two Houses of Parliament. Delivering the speech in the Central Hall of Parliament, President Kovind said, “This decade is extremely important for India. In this decade, we will complete 75 years of our independence. This time, we all have to work together with new energy towards making of a new India.”

Talking about the flagship schemes of the central government, President Kovind said that serious efforts are being made at every level in preventive and curative healthcare. He added,

Along with healthcare, addressing the issue of air and water pollution, President Kovind said,

The Government will be implementing the National Clean Air Programme in 122 cities of the country. I am glad that the positive impact of the Namami Gange Mission launched by the Government has now started to become visible. Under this mission, projects worth Rs 7,000 crore have been completed and projects worth more than Rs 21 thousand crores are in progress.

Even today, there are about 15 crore houses without piped water supply in rural areas of the country. Our sisters and daughters face maximum hardship due to lack of water supply in the house. Further, contaminated water adversely impacts the health of the entire family. In order to ensure the availability of a sufficient quantity of potable drinking water to each rural household in the country, the Government has launched the Jal Jeevan Mission. Central Government, all State Governments, local bodies and voluntary organisations are working together to transform this Mission into a people’s movement. In the coming days Rs 3 lakh 60 thousand crore will be spent on this scheme. The Government has also launched the Atal Bhujal Yojana with special focus on seven of the most vulnerable states of the country, where groundwater level is depleting rapidly.

President Kovind concluded the speech with an urge, he said, “Let us all come together to fulfill the dream of a New India; let us together make a New India.”

As India awaits for Finance Minister Nirmala Sitharaman’s union budget for the financial year 2020-21 in Parliament on February 1, experts and environmentalists hope for a budget that is focused on waste management, pollution, health, and nutrition.

The National Nutrition Mission (Poshan Abhiyan) was allocated Rs 3,000 crores in Budget 2018-19 and it saw an increase of Rs 400 crores with allocated budget Rs 3,400 crores in Budget 2019-20. Government’s flagship nutrition scheme Poshan Abhiyan aims to tackle malnutrition in India and efforts to expand the outreach of health and nutrition services among slum-dwellers and migrant population.