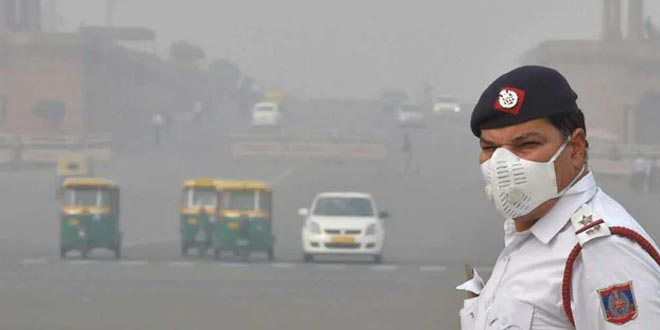 New Delhi: Multiple reports have established that air pollution is a risk factor for many of the leading causes of death including heart disease, stroke, lower respiratory infections, lung cancer, diabetes and chronic obstructive pulmonary disease (COPD). According to the State of Global Air Report of 2019, air pollution is the third leading risk factor for mortality, accounting for more than 12 Lakh deaths in India in 2017 alone. In the last few years, the country has been facing increasingly deteriorating air quality, and the citizens and experts have started demanding practical, more effective and consistent efforts towards addressing this issue on all days of the year and not just during winters. As the government prepares to roll out the Union Budget on February 1, for the coming financial year, here are a few experts and citizens sharing their expectations and recommendations from the Union Budget 2020-21.

While sharing his expectations and recommendations, Vivek Chattopadhyay, air pollution expert at the Centre of Science and Environment, a Delhi based think tank said that there is a need for increasing the number of public transport. He said,

Bus service needs to be strengthened across the cities which has been neglected so far and has led to a massive deficit in adequate public transport. Procurement of buses by the state agencies should be incentivised by the central government as better public transport will help in reducing emissions.

He also said that electrification of public transport must be done at a faster pace in order to reduce air pollution for which he recommended increased subsidies on electric vehicles especially the two-wheelers. He said that while in the previous budget the government tried to reduce the cost of EVs to some extent, these vehicles are still unaffordable for a large section of the society.

Highlighting the need for a cleaner public transportation system, Prarthana Borah, India Director, Clean Air Asia, said that the government must ensure that along with private vehicles, all public vehicles follow the new fuel standard BS VI or Bharat Stage VI. The Bharat Stage (BS) emission norms are standards instituted by the government to regulate the output of air pollutants from motor vehicles. BS VI emissions norms require the installation of particulate filters to remove particulate matter from the vehicle exhaust. Thus the vehicles complying with BS VI norms are cleaner as these emit lesser sulphur oxides, nitrogen oxides, and other toxic gases.

Talking about the air pollution caused by older vehicles, Naveen Soni, Senior Vice President, Toyota Kirloskar Motor emphasised on finalizing and passing of the scrappage policy for all old vehicles. He said,

We would like the budget to spur demand of new vehicle without putting additional burden on the government exchequer and one way to achieve this /is by passing the scrappage policy for all old vehicles, the draft policy of which has been shared by the government already. This will have a positive environmental impact as the older vehicles not only emit more air pollution, these use more fuel and even add to an increased burden on city resources after being discarded.

Implementation Of The Existing Emission Standards By Industries

Mr. Chattopadhyay asserted that the industries have risen to be a major polluter. He suggests that the current emissions standards of the central pollution control board (CPCB) for the thermal power plants and other industries must be implemented strictly. For this, the budget needs to be allocated for incentivizing emission control devices and monitoring of these plants. He emphasized on the fact that the implementation of emission standards in power plants have been delayed for a long time and said that the use of coal and other forms of fossil fuel must be minimised wherever possible.

Transparency And Accountability In Spending Under National Clean Air Programme

The union government launched the National Clean Air Program (NCAP) on January 10, 2019 to address air pollution in 102 cities, to which 20 more cities were added later in the year. The NCAP targets reducing key air pollutants Particulate Matter 10 and 2.5 (ultra-fine particulate matters that can cause serious health problems) by 20-30 per cent by 2024 from levels in 2017. Particulate matters are hazardous as these can cause serious health problems.

In the budget 2019-20, the central government allocated Rs. 406 crore for NCAP, for 102 cities. Talking to NDTV about budget expectations for NCAP, an official from Carbon Copy, a non-government organisation, shared that an RTI found that the budget allocated for implementing measures to reduce air pollution from cities with poor air quality like installation of air quality monitoring stations, awareness building, and other pollution mitigation activities was not being spent adequately. He said that some part of it was being used for procuring mechanical street sweepers, and greening and paving activities which should done from the budget for Urban Development Department or municipal bodies.

While expressing his expectation from the upcoming budget he said,

If India wants to create a success story in air pollution management and mitigation, proper implementation, enforcement and execution in NCAP is crucial to that effect. There is need to be more transparency and accountability towards every paisa spent under this important programme. The government needs to ensure that the money allotted is not left unspent or spent wrongly.

Mr. Chattopadhyay highlighted the needs for increased incentives for farmers to deal with stubble. He said,

Farmers need support from the central government as well as the state governments. Currently, most farmers are not able to procure the machines even on rent basis because of the high cost because of which they resort to burning of stubble. Procuring machines like ‘Happy Seeders’, which allow sowing of the next crop without disturbing the stubble, must be made more affordable for small scale farmers.

According to Sachin Taparia, Founder and Chairman of LocalCircles – a community social media platform that has done an online survey with more than 80,000 people said,

Our survey has clearly shown that citizens want that Budget 2020 should fund projects that will ensure enough groundwater for farmers of Punjab and Haryana in early June, thereby minimising the need for stubble burning in October-November. This is because of lack of water for irrigation in June –July forces the farmers to sow rice later which gives a very short window between the harvesting of the rice crop and sowing of the next crop. Citizens are also keen that the Government via budget 2020 invests in enabling stubble collection and recycling infrastructure in the country.

According to Martand Shardul, a fellow at TERI (The Energy and Resources Institute) household air pollution leads to almost 30 per cent of ambient air pollution which is mostly caused by using dirty fuel for cooking. He added that schemes like Pradhan Mantri Ujjwala Yojana (PMUY) have shown that clean cooking can become a reality for underprivileged homes. The PMUY has provisioned an LPG connection to over 80 million underprivileged residents. However, he pointed out that the drawback with this scheme is the affordability issue faced by households in refilling the cylinders. In order to address this issue and further the adoption of LPG (Liquefied Petroleum Gas) among PMUY consumers, the cost of a 14.2 kilogram cylinder should be around Rs. 300, said Mr. Shardul. He said,

As per an estimate by TERI, the cost of provisioning eight refills annually to more than 40 million PMUY beneficiaries is Rs. 136.3 billion. To get monetary resources for this, TERI recommends that a cess of Rs. 1 on per litre of petrol/diesel and a cess of Rs. 2/SCM (Supply chain management) of PNG (Petroleum and Natural Gases) consumption will be useful. This intervention is likely to have an impact on inflation. However, as per our analysis, the cost of provisioning the proposed monetary support to targeted PMUY consumers is at least 20 times less than the economic cost of health burden arising from household air pollution.

Adding on the need for increasing incentives for increasing the adoption of cleaner fuel in running the household generators, Shiva Vig, CEO of BioD Energy (India) Private Limited said,

Looking at the grim situation of smog and hazardous air pollution in northern India and other parts of the country, identifying and implementing new and sustainable fuels is the need of the hour. Usage of biodiesel instead of diesel not only in automobiles but also in residential generators can bring a reduction in greenhouse gases. Thus, dedicated funds must be allocated for developing the infrastructure for such biodiesel producing units.

Dr. Nitesh K Dogra, a physician in Delhi said that along with effective utilization for budgets allocated for various pollution mitigation measures, there should a mechanism to hold the government accountable in case of misappropriation or inadequate implementation of the budget. He also added,

In order to reduce the health burden caused by the air pollution, it is needed that money is allocated towards finding long-term preventive solutions. Using masks or air purifiers is not a long-term measure and may not be affordable for many.

Reminding that pollution needs to be checked all year round Vrinda Gandhi, a student of class 11 and a young environmentalist from Delhi said that the PM levels had climbed to more than 500 in Delhi-NCR and other cities like Varanasi, Lucknow, and Chennai in summer which is an evidence enough that severe air pollution is a summer-time problem too. Therefore, the government must allocate budget for implementing measures like those mentioned under the emergency plan called GRAP (Graded Response Action Plan) that is implemented on severe pollution days, all year long. Ms. Borah said that spending money in installing smog towers would be a waste. She said,

Smog towers have not been proved beneficial till now due to lack of data. China has been using one and now India is installing some but there is no data or evidence to prove any improvement in air quality due to smog towers. Instead of wasting money on fads like smog towers, the government must focus on curbing the sources of air pollution.

Seema Bali, a teacher and a resident of Delhi said that air quality monitoring must be strengthened in each city/ town. She further said that in case an area suffers poor air quality, along with relevant officials, the MPs (Member of Parliament)/ MLA (Member of Legislative Assembly) should be held accountable for not utilizing the budget effectively. After all budget connects policy with the people and budgets reflect the will and priorities of the government, she said. 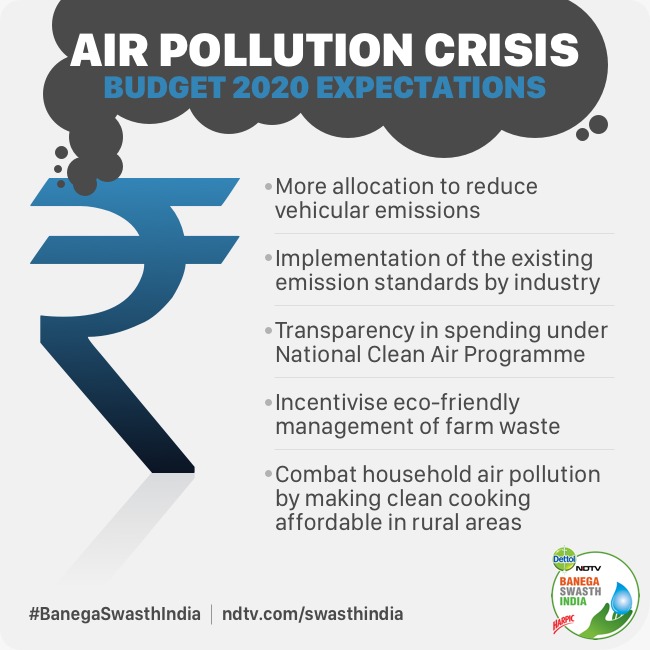 Budget 2020: 10 Things Health And Nutrition Experts And Activists Are Expecting From The Union Budget