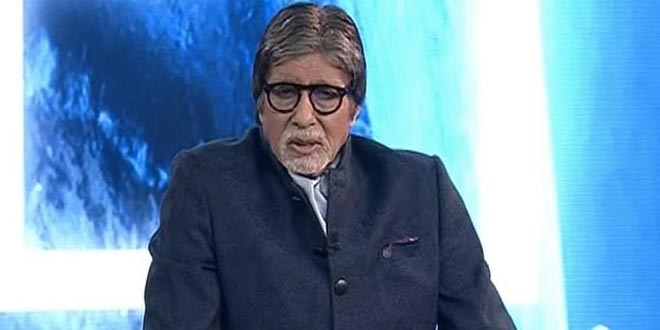 New Delhi: “Only a healthy India can be a prosperous India,” said Banega Swasth India Campaign Ambassador Amitabh Bachchan as he kicked off the 12-hour Swasth Bharat, Sampurna Bharat telethon. NDTV – Dettol have been working towards a clean and healthy India since 2014 via Banega Swachh India initiative, which is helmed by Mr Bachchan. The season 8 of the campaign aims to highlight the inter-dependency of humans and the environment, and of humans on one another with the focus on One Health, One Planet, One Future – Leaving No One Behind.

In the last 8 years, along with NDTV and Reckitt, we have been focusing on the importance of sanitation and hygiene, and health. We started by talking about why a clean nation was an important goal, and now we will focus on why a healthy future is depended upon this foundation, Mr Bachchan said as he underlined the agenda for Season 8.

He further highlighted that the biggest lesson from the COVID-19 crisis is that health is the biggest gift of all, which we can also pass it on to others.

Two years ago, what began as a respiratory disease in a small part of the world, has today caused a global pandemic. Our world has changed completely forever, it is not the same world we know anymore. Everyone knows the saying – health is wealth, Mr Bachchan said at the telethon.

Furthermore, Mr Bachhan said that health is not only our future, but also the foundation of a prosperous India. He said,

We as a nation can only thrive when everyone has equal access to cleanliness and sanitation, nutrition, technology, clean environment, and affordable healthcare. We will have to help each other, especially the most vulnerable communities. We need to bring the LGBTQ community, pregnant and lactating mothers, children and tribal population together. We can not leave anyone behind. This is the Sustainable Development Goal, that we aim to achieve by 2030.

Mr Bachchan also noted the challenges to achieve this goal. He explained,

As per a recent survey, India’s poverty has doubled in number, as 3.2 crore people have slipped down from the middle class. In rural India, average household income has reduced by 75 per cent and debt has increased. Due to this, many families and children have become hungry and homeless. For example, in Uttar Pradesh, more than 4 lakh children are malnourished and the Anganwadis that can take care of them are closed due to COVID-19.

Mr Bachchan says that COVID-19 has taught us that we need to work together.

It is necessary for the government to improve the status of healthcare facilities and nutrition. At the same time, as citizens we need to take care of ourselves and pay attention to our health. We need to inculcate habits with which we receive good nutrition and live hygienically. These will be the first few steps towards staying healthy. If we don’t take care of ourselves, it leads to an added expense on diseases.

Even before this pandemic, health issues used to cause a 15 per cent decline in the global GDP, MR Bachchan pointed out.

In a positive news, he said, in the UN Sustainable Development Goals’ global index, India has improved its ranking in almost all the indices.