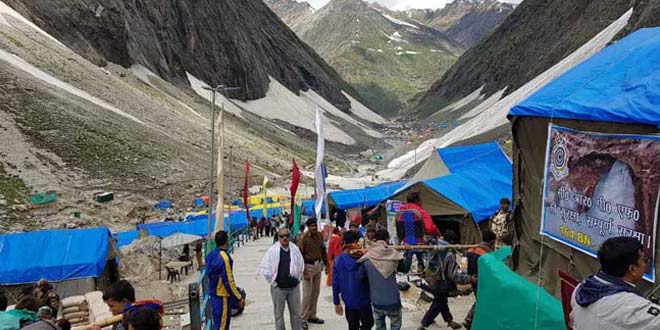 Jammu: In addition to performing its primary duty of providing security, the CRPF (Central Reserve Police Force) will launch a ‘save environment’ campaign during the pilgrimage to the 3,880-metre-high holy cave shrine of Amarnath in the south Kashmir Himalayas. The 46-day annual yatra is scheduled to begin from the twin routes — the traditional Pahalgam track in Anantnag district and the shortest Baltal track in Ganderbal district — on July 1 and will conclude on August 15, coinciding with the Raksha Bandhan festival.

CRPF is part of the multi-security grid comprising Army, local police and other security forces to ensure smooth and incident-free yatra. “This year, CRPF is appealing pilgrims as well as the public in general to play their vital role in preserving the fragile environment especially along the yatra area,” the Jammu-based Public Relations Officer of the paramilitary force Ashish Kumar Jha told PTI.

He said the CRPF had prepared the hoardings and banners and will display these on prominent places along the yatra route, including Jammu Tawi railway station, airport, bus stands, various base camps and ‘langer’ (community kitchen) points before the yatra begins. Mr. Jha said,

It is our duty to safeguard nature and we expect the pilgrims and locals to extend their cooperation and play their role in maintaining the cleanliness of the mountains, rivers and streams.

He said the hoardings will be in both English and Hindi to convey a powerful message for the need to preserve the nature by avoiding plastic and polythene and use environment-friendly material and dustbins to dispose off the waste in a proper manner.

Besides other security agencies, the officer said the CRPF is deployed predominantly for the safe and smooth conduct of yatra. He also said,

CRPF, like other security agencies, will ensure security of pilgrims, their camps and convoys and will also provide all possible assistance to the pilgrims in consonance of its public friendly image.

Meanwhile, Jammu Divisional Commissioner Sanjeev Verma said that the administration is fully geared up for the yatra and has made necessary arrangements for the pilgrims like medical services, banking facilities and food court.

A police control room was also set up at the Niwas besides the State Road Transport Corporation counter, he said adding the first batch of pilgrims will be flagged-off from the Niwas on June 30 by K K Sharma, the advisor to the governor. Mr. Verma said efforts are underway to ensure wide publicity to the pilgrimage.

This year, he said, mobile bio-toilets are being installed enroute Jammu to Banihal and Jammu to Pir Ki Gali along Mughal road. He said,

Though, Mughal Road shall be used as an alternate route, there shall be ample langers all along the route as per past practice. Besides, buses for pilgrims shall be lined up separately for both Pahalgam and Baltal routes at Yatri Niwas to avoid any chaos while looking for the concerned route buses by the pilgrims.

He said all the vehicles carrying pilgrims would be tagged with tracking devices. He said,

This will be done to ensure safety of passengers.

Related Topics:
Cleanliness Jammu and Kashmir
Up Next