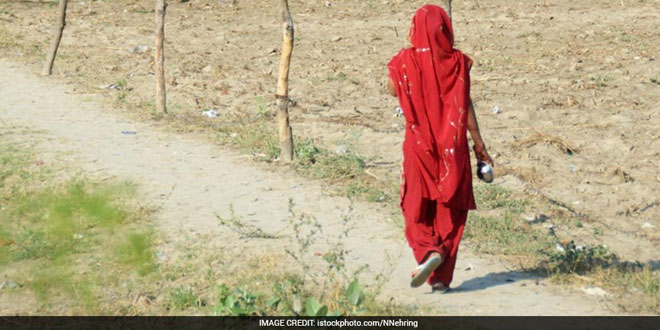 New Delhi: “There are people in India who believe that defecating inside the house is an ‘un-clean’ task that can make the house impure. So, they go outside to relieve themselves, in an attempt to save their homes from getting impure. Some also do this not because of any kind of beliefs but due to lack of toilets in their vicinity. They usually defecate in open either in the nearby agricultural fields or around ponds and rivers,” said Suresh Rohilla, an expert at Centre for Science and Environment while talking to NDTV about the findings of a study recently published by UNICEF (United Nations Children’s Fund). This study attempts to find the impact of open defecation on the environment – water sources, soil and food. It also establishes the positive change that the state-supported cleanliness initiatives and sanitation-centric behaviour change messaging can bring to the ecology of a place. Under the study titled ‘UNICEF Report On The Environmental Impact Of The Swachh Bharat Mission On Water, Soil And Food’, UNICEF tested 752 samples of water, soil, and food from 12 villages that were declared open defecation free (ODF) and 12 non-ODF villages across West Bengal, Bihar, and Odisha.

According to UNICEF, the contamination levels of faecal bacteria found in water, soil and food sample taken from ODF and non-ODF villages were different. The villages where people use toilets are much less likely to let faeces contaminating their drinking water and food than those in which people practice open defecation. The report says, “Improvement in sanitation and hygiene practices as well as supportive systems such as regular monitoring from government and behaviour change messaging are likely to reduce contamination of groundwater source, soil, and food.”

Here Are Five Major Findings Of The Study – UNICEF Report On The Environmental Impact Of The Swachh Bharat Mission On Water, Soil And Food

The report also found that faecal sludge management together with solid and liquid waste management is effective to reduce the risk of contamination and disease transmission. According to a senior official from the Ministry of Drinking Water and Sanitation, Swachh Bharat Mission (SBM) has now started focusing on sustaining the progress made by the mission till now and will be extending the efforts towards ODF-plus by including solid and liquid waste management.

As the study conducted by UNCEF lauded the role of the flagship initiative of the central government, Swachh Bharat Mission – Grameen (SBM-G), in improving the status of sanitation and reducing the risk of contamination of water, soil and food, expert say that the sample size is too small to capture the level of impact. As per Mr. Rohilla, “The sample size taken in the current study, 12 ODF and 12 non-ODF villages in only three states, is too small to make a claim that SBM has brought change so drastically. A study on the impact of a major scheme like SBM needs to take into account various geographical and climatic conditions because, for example, sanitation in a place that receives heavy rainfall in a year needs to be looked at with a different perspective than a place that remains dry. Similarly, sanitation in plains is dealt with differently than on mountains. Also, the data on water borne diseases may not capture the real health situation because many times, people tend to go for self-medication or over the counter medication instead of visiting a health centre. So there is a need to conduct a bigger study covering different topographies and climatic conditions.”

VK Madhavan, Chief Executive at WaterAid India said that the study provides inputs on a subject on which very little information is available, post initiation of SBM. He asserted that the study contributes on what needs to be done to sustain the gains made by SBM. He said, “The differences in contamination rates between ODF and non-ODF villages are dramatic. The major take away for us all and policy makers is quite clear. There is a need to focus on hygiene behaviours, moving beyond toilet coverage and usage to ensure that not just does appropriate hand-washing take place post defecation but more importantly that hygienic behaviours are adopted in both the handling of food and water.”

A study conducted by the World Health Organisation (WHO) in 2018 estimated that by the time India is ODF, SBM will be able to save over 3 lakh lives. However, with only about three months left for the ODF deadline, out of the total 6,49,481 villages (as per 2011 Population Census), only 5,65,105 have been declared ODF under SBM-G and 84,376 villages are still non-ODF. This means that more than 84 thousand villages of the country have high risks of environmental contamination.

On This International Yoga Day, Government Asks People To Use Eco-friendly Products And Live A Sustainable Life