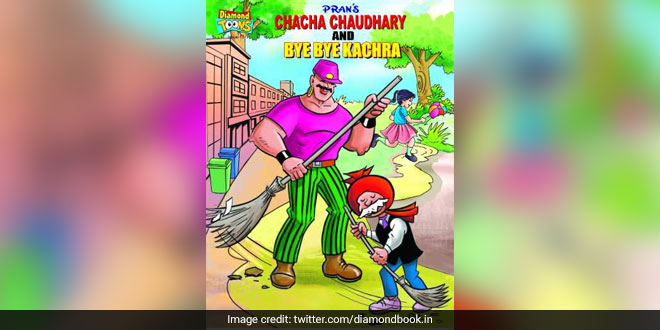 Mumbai: ‘Chacha Chaudhary’s brain works faster than a computer’- every 90s kid is familiar with this famous line from the comic series of Chacha Chaudhary. The unforgettable character created by Pran Kumar Sharma, which is deep rooted in every Indian’s heart, is here to preach and tackle yet another social issue – cleanliness. Wearing a red turban and waistcoat with a double inside pocket, one of the biggest heroes, Chacha Chaudhary has picked up a broom to clean the streets of India and to spread the message of Swachh Bharat Abhiyan.

Also Read: Have You Seen The Viral Picture Of ‘Roof-With-A Jeep’ From Ladakh? 3 Idiots Inspiration Sonam Wangchuk Reveals The Story

Titled as ‘Chacha Chaudhary and Bye Bye Kachra’, Diamond Toons, a publication house, recently launched the fourth edition of Swachh Bharat Abhiyan series. In this edition, Chacha Chaudhary creates awareness on the three R’s of waste management – reduce, reuse and recycle. Children being one of the major carriers of change, most of the characters in the comic book are aged between 5-15. With the help of children, Chacha Chaudhary teaches parents to segregate waste and throw them in coloured bins. He then goes to explain how wet waste can be treated completely through composting techniques and dry waste can be recycled.

Launching the book on December 19, Manish Verma, Chairman, Director Diamond Toons said that it is through Chacha Chaudhary that subjects of national importance have been taught to children in a fun and an interesting way. Since the reach of Chacha Chaudhary is massive, children all over the country can learn all the concepts practiced under the Clean India Mission. 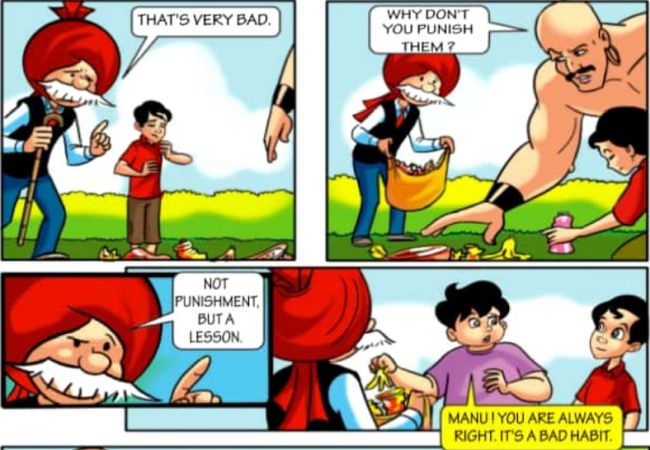 An excerpt from Chacha Chaudhary and Swachh Bharat

In each of the edition under the Swachh series, that was introduced in 2017, different issues have been addressed. For instance, in the first one titled ‘Chacha Chaudhary and Swachh Bharat’, children go for a picnic along with Chacha Chaudhary. As they are wrapping up the picnic, children indulge in littering. While returning Chacha Chaudhary picks up the same litter and puts it below the seat where children are sitting. This way he makes them realise the concept of handling one’s own waste. As a second picnic spot, he takes the children to a waste management recycling unit showing them the process of recycling and composting.

In the second edition, Chacha Chaudhary collaborates with Akshay Kumar, who had propagated the message of open defecation free in his movie ‘Toilet-Ek Prem Katha’. With the help of Akshay Kumar, Chacha Chaudhary visits households in the village having no toilet and asks them to construct one for sanitation and hygiene purposes.

In the third edition, the famous ‘Roko Toko’ movement pioneered by children in Bhopal is used to carry forward the message of cleanliness. Along with a character named ‘Super Dustbin’, Chacha Chaudhary makes citizens of Bhopal aware about swachhta. Just like in the real life, children in the comic beating metal boxes loudly if they come across anyone defecating in the open or littering.

An excerpt from Chacha Chaudhary and Swachh Bharat

To ensure language doesn’t become a barrier in spreading the message of cleanliness, the comic series has been translated in other major Indian languages like Hindi, Bangla, Gujarati and  Marathi.