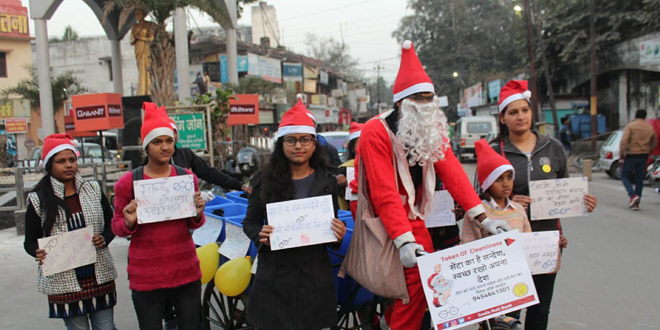 Speaking to NDTV about the initiative, Azad Pandey who runs Smile Roti Bank in the city says,

India is a religious country and believe it or not, people put religion over laws and regulations. Coming to the festival of Christmas, Santa Claus is dear to Children. So I decided to combine the two and put forward the message of Swachh Bharat Abhiyan in a quirky way and reach out directly to children. To put ideas into action, I borrowed a cart (my kind of sleigh) and eight garbage bins from Municipal Corporation and pasted handwritten messages on those bins.

Also Read: Chacha Chaudhary Is Back, This Time To Promote Cleanliness And Waste Management

From 4 in the evening till 8 in the night, Azad rode the cart in posh areas of the city. To make sure people take home the message of clean India, Gorakhpur’s own Santa Claus got posters printed saying, “Santa’s message, keep your country clean” and distributed it among passersby.

We even asked individuals to take a selfie with the placard and upload it on social media. This way their followers will also get to know about the campaign. We distributed around 1,200 placards and let’s assume 1,000 individuals took a selfie with it. Now imagine the number of people looking at those pictures and at least giving a thought to cleanliness, says Azad. 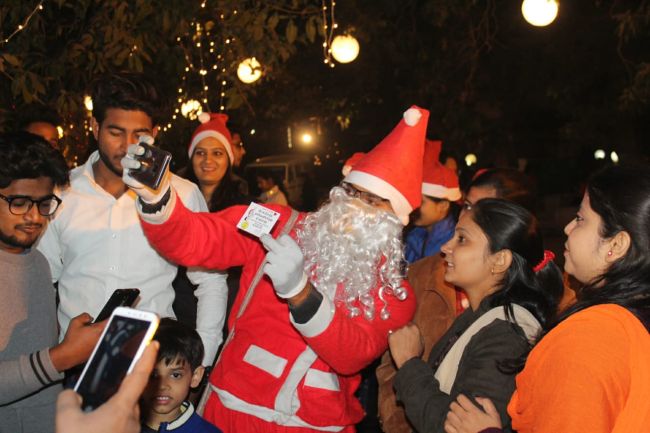 While riding in the city, Azad noticed that it is not just the uneducated who lack awareness, those with education too add to the mess. For instance, at Indira Tiraha, a locality in the city, people come with their family to spend some leisure time and enjoy. While picnicking they discard empty packets of biscuits, chips, and other food items out in the open.

Yesterday, when picnickers saw me and volunteers picking up their waste, they got conscious and joined us. People need to understand and be accountable for the waste they create, says Azad.

This is not the first time Azad did something to promote cleanliness. Last year on Christmas, Santa’s disguise stood on a dustbin in Golghar market in the city and talked about cleanliness. He along with volunteers picked up garbage lying around dustbin and made sure everyone uses dustbin, at least for a day.

Azad plans to come up with more such ideas to promote cleanliness campaign in the city and make Gorakhpur Swachh literally.